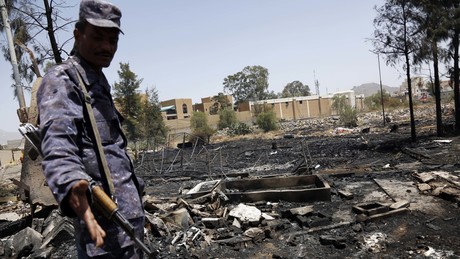 A ceasefire has officially been in effect in Yemen since the beginning of April. However, the parties to the conflict accuse each other of not adhering to them. The UN special envoy also warns that the ceasefire is fragile.

Hussein Al-Ezzi, deputy foreign minister of Yemen’s internationally unrecognized government, which is backed by the Houthi militia, said Friday that the Saudi-led military coalition is not honoring the terms of the recently agreed ceasefire. The Iranian agency Tasnim reported this, citing Yemeni media.

At the beginning of April, parallel to the beginning of the Islamic month of fasting, Ramadan, the United Nations brokered a ceasefire between the military coalition, which has been intervening in the Yemeni civil war since March 2015, and the Houthi militia. Saudi Arabia had pledged to stop its attacks on Yemeni soil and lift the blockade of the country.

However, Al-Ezzi complained that Saudi forces continued to block planes from entering the international airport in the country’s capital, Sanaa. Likewise, Riyadh would prevent oil tankers from heading for Yemen.

The Houthi official criticized the UN for not truthfully documenting violations of the ceasefire by Saudi Arabia.

The Houthi militia had pledged themselves to a ceasefire as long as the other side also adheres to the terms of the agreement. Prior to the bilateral ceasefire, the Houthis’ top leadership unilaterally announced a voluntary three-day ceasefire on retaliatory attacks against targets in Saudi Arabia.

The UN’s special envoy for Yemen, Hans Grundberg, submitted a report to the UN Security Council on Thursday. In it he had warned that armed clashes in the central, oil-rich province of Marib were threatening the ceasefire between the Houthis and Saudi Arabia, as the Chinese agency Xinhua wrote. Grunberg referred to the ceasefire as “the light at the end of the tunnel”, adding:

“However, it will require continued engagement by the parties and broad support from the region and the international community to ensure that (the ceasefire) endures and becomes a turning point towards peace.”

The agreed ceasefire includes all military offensives on land, sea and air throughout Yemeni territory.

Saudi Arabia began its military intervention in Yemen’s civil war in March 2015 along with a number of allies, with arms and logistical support from the US and several Western countries. The goal was to restore the Riyadh-backed government to power and crush the Houthis, who had seized control of much of Yemen.