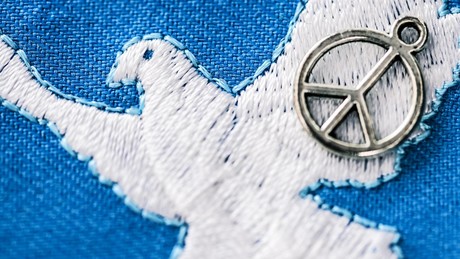 Ms. Klein, can you first tell us something about the background and the activities of the German Peace Society?

The DFG was founded in 1892 by Bertha von Suttner and Alfred Herrmann Fried founded.

Bertha von Suttner, who later won the Nobel Peace Prize, also coined the well-known appeal for peace “Never again war!” This expresses the radically pacifist attitude of the DFG, which is fundamentally against any kind of war for humanistic reasons. From the perspective of the DFG, however, “never again war” also means that the causes of the war must be investigated and eliminated. I will do that later with regard to the causes of the Ukraine war explain.

After the Second World War, the DFG campaigned against the rearmament, rearmament, armaments industry and arms exports of the Federal Republic – and helped shape the Easter March movement. In 1974, the DFG merged with the Association of United War Service Opponents, which had been founded in 1958 from the predecessor organizations of conscientious objectors. Since then, the new association has been called DFG-VK und connects radical opposition to military service with political pacifism.

I am a member of the local group in Cologne. We regularly take part in protests against the annual military service in Cologne Cathedral. According to its statutes, the DFG-VK should also work to create a social climate conducive to peace. That is why our local association is currently committed to maintaining the town twinning Cologne – Volgograd a. The exchange between Russian and German civil society as a bridge to international understanding should be maintained even in difficult times.

How did you come to be involved with the DFG – what is your personal motivation?

I only became an active member of the German Peace Society later, when I had already been a practicing Buddhist for many years. It is part of Buddhist practice and lifestyle to enable oneself to live peacefully and to overcome enemy images. A few years ago, the Buddhist lay organization closed Soka Gakkaito which I belong, to ICAN – International Campaign to Abolish Nuclear Weapons. In addition to various peace organizations, spiritual communities are also allied under the umbrella of ICAN. In 2017, ICAN succeeded in establishing the Nuclear Weapons Ban Treaty in the UN. For this she received the in 2017 Nobel Peace Prize.

In January 2021, the treaty came into force after 50 countries had ratified it. But the nuclear powers and their allies have not yet signed it.

It was in this context that I came across the DFG again. She has repeatedly called on the federal government to ratify the treaty. My joining the DFG was motivated primarily by their commitment against Germany’s nuclear participation.

Can you explain what “nuclear sharing” means?

This term describes a deterrent concept. US nuclear bombs have been deployed in some NATO countries – these countries are affected by nuclear sharing.

In 2010, the majority of German MPs wanted to end Germany’s nuclear participation. In the vote on this, they even voted against it by a majority, but this decision was never implemented.

Let’s talk about the current war in Ukraine. What is your stance on this and how do you assess what is happening, taking into account the basic principles of the DFG?

Basically, the DFG is a pacifist organization with the clear motto “Create peace without weapons”, which rejects any military conflict. This was the main concern of the founder Bertha von Suttner. In the event of a conflict, negotiations must continue until a solution is found.

At the same time, however, it is considered crucial to get to the bottom of and eliminate the causes of war. On the one hand, the causes that were set in the past must be identified and dealt with, and on the other hand, political action must be continuously evaluated to determine whether it does not create causes for future wars.

When researching the causes of the Ukraine war, it is therefore necessary to examine how it came about. After the end of the Cold War, there was a great opportunity for peace and a just reorganization of the world. Instead, in the immediate aftermath, US and NATO political forces have expanded NATO’s sphere of influence and military presence ever further east. Russia was increasingly surrounded by NATO forces on its external borders. As a result, Russia had to feel increasingly threatened by the strong NATO presence and NATO military bases in the former Warsaw Pact countries. Recently, it was even suggested that the border country of Ukraine should be included in NATO. Shortly before the Russian troops invaded Ukraine, there was discussion as to whether the Ukrainian army would be equipped with nuclear weapons, contrary to all agreements.

One has to ask oneself who is jointly responsible for the war in Ukraine and who contributed to it. Before unilaterally blaming Russia for it. That’s what I mean by examining and dealing with the causes of war.

Shortly after the Russians invaded Ukraine, the federal government decided to supply Ukraine with war material and weapons and to release 100 billion euros for the armaments budget. No one can doubt that arms deliveries promote wars.

That is why the DFG-VK positioned itself very quickly and made the following demands:

No arms deliveries to Ukraine!

No rearmament in Germany!

No orders for the German armaments industry!

On March 19, she helped organize a large peace demonstration in Cologne against the federal government’s strategy, according to which rearmament and arms deliveries to Ukraine would help resolve the conflict.

There is a broad consensus within the Peace Society on criticism of the escalating and emotionally manipulative war reporting in the media. Only information that corresponds to the one-sided narrative is disseminated. The media manipulation consists in showing emotional pictures and stories of injured children and mothers only from one side involved in order to increase the acceptance of arms deliveries to this warring faction. With such strategies, the escalation potential of the war is even promoted for the benefit of the armaments industry.

Ms. Klein, would you like to talk about other aspects that are important to you in this situation?

Yes, because a connection is easily lost from view. In 1971, the UN adopted the International Biological Weapons Convention, which prohibits the development, manufacture and stockpiling of bacteriological (biological) weapons are.

Today, however, genetic engineering offers completely different possibilities than 50 years ago. Currently, it would be possible for bioresearch laboratories that purportedly conduct research peacefully and to protect the population from potential bioweapons attacks to actually be involved in bioweapons research and production themselves. The most recent example of this question is the existence of around 30 biological weapons laboratories discovered by the Russian army in Ukraine. Their existence and their financing – partly by the Pentagon – were also admitted by the USA. The activities of these laboratories urgently need to be investigated.

Finally, the novel “gain of function” bio-research, in which viruses are genetically engineered, is justified as a necessary civil research in the face of dangerous threats posed by worldwide virus pandemics. However, there is also the assumption that, for example, the corona virus itself was genetically manipulated and came from a biological laboratory.

The interview was conducted by Felicitas Rabe on April 13, 2022.

More on the subject – Thomas Röper on the Ukraine conflict: “The West wants to prolong this war at any price”