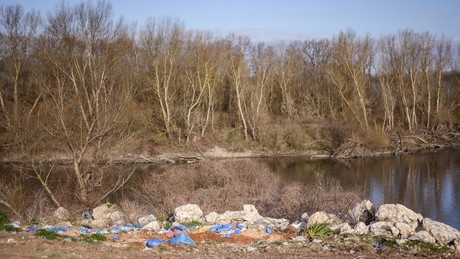 Greek police said an exchange of gunfire near a river marking the border with Turkey killed a migrant attempting to enter the country on a rubber dinghy.

According to Greek authorities, a migrant was killed by a bullet during an exchange of fire on the Greek-Turkish river Evros on Saturday evening. This was announced by the Greek police on Sunday. Greek border guards used a night vision camera to determine that a rubber dinghy was leaving the Turkish side of the river. They asked the inmates over the loudspeaker to return to Turkey. When individual shots and then volleys were fired from the Turkish side in an unknown direction, the Greek border guards took cover and fired warning shots into the air, the police said.

Four migrants were therefore able to reach the Greek shore. Greek police subsequently discovered the body of a woman in the river water. She had a bullet wound in her chest. The deceased is to be examined by a forensic doctor. According to the police, the migrants stated that they had paid a gang of smugglers in Istanbul 2,000 euros per person for the passage to Greece and thus to the EU. It is still unclear from which countries the migrants come. There was initially no official statement from the Turkish authorities on the incident.

One of the routes used by smuggling gangs to bring migrants from Turkey to Greece and thus to the EU runs along the border river Evros. The Greek border guards and the European border protection agency Frontex are closely monitoring the region. In addition, Greece has erected kilometer-long border fences in many places. According to the UN refugee agency, a good 1,000 migrants have crossed the border since the beginning of the year. In 2021, a good 4,800 people entered the country illegally, in 2020 it was almost 6,000.

Meanwhile, Athens is protesting against the flights of Turkish fighter jets over the Aegean islands. Foreign Minister Nikos Dendias told the Athens-based newspaper Kathimerini on Sunday that the numerous overflights of the fighter-bombers were a flagrant violation of international law and not in line with recent efforts to ease tensions between Athens and Ankara.

According to Athens, Turkish fighter jets penetrated Greek airspace more than 200 times from Monday to Holy Saturday. They are said to have flown over Greek islands in the Aegean Sea at least 30 times. Some planes flew over Greek islands at an altitude of just 460 meters.

Turkish President Recep Tayyip Erdoğan and Greek Prime Minister Kyriakos Mitsotakis met in Istanbul in March after a long ice age between the two NATO countries and announced that they want to reduce tensions in the region to avoid NATO’s southeastern flank in view of the Ukraine war additional burden.

Turkey denies Greece sovereignty over a number of islands in the eastern Aegean because they are not demilitarized. Turkey has already sent corresponding notifications to the United Nations in recent months. Turkey argues that militarization of the islands is not in line with the Lausanne (1923) and Paris (1947) treaties. Greece, on the other hand, points to the numerous landing craft on Turkey’s west coast, which would threaten the islands. Therefore, the islands would have to be armed for defense. From the point of view of the Greek government, the United Nations Charter justifies these defensive measures.