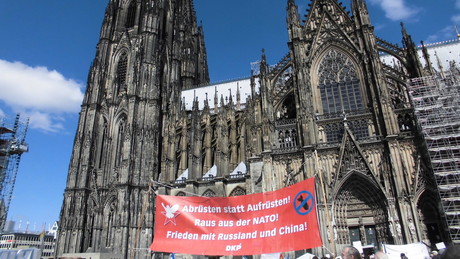 The traditional Easter marches of the peace movements took place in Germany again this year. In Cologne, the focus was on the war in Ukraine. The participants chanted: “Disarm instead of arming!”, “Peace with Russia and China!” and “Out of NATO!”

A few hundred people took part in the Easter march in downtown Cologne on Saturday. On posters they demanded “Disarm instead of rearm!”, “Peace with Russia and China!” and “Out of NATO!” In addition to several peace initiatives, representatives of left-wing parties also took part in the demonstration.

Under no circumstances should Germany contribute to the prolongation or even a further escalation of the war in Ukraine, Elvira Högemann from the Cologne Peace Forum criticized the German government’s arms deliveries. As a peace activist, she was stunned by the calls for a no-fly zone and heavy weapons. This would only increase the number of war casualties.

According to Högemann, Germany is using the war in Ukraine to justify increased militarization and rearmament in its own country. The 100 billion euros that are now being approved for armaments are urgently needed for social purposes, the peace activist continued. Högemann explained that politicians and the mass media would irresponsibly incite the public against Russia by means of “enemy propaganda”.

Peace can only be achieved through negotiations. Högemann demanded that the European continent, which also includes Russia, must return to a common European security policy. There would have been no lack of diplomatic efforts on the part of Russia to implement one. According to the peace activist, the Russian Federation has been making suggestions on this since 2001. Russian President Vladimir Putin would have presented treaty proposals on this in 2021. However, all of these efforts were ignored by the West and any negotiations in this regard were refused, explained Högemann.

That is why the peace movement must now also reflect on how the war in Ukraine could have come about. However, according to Högemann, NATO’s eastward expansion contributed significantly to the escalation in Ukraine. The omissions of all those involved still have to be evaluated, she explained. In her opinion, Europe must get back on the road to a common security architecture with Russia – even if this has now become more difficult, the peace activist ended her speech.

But despite the political pressure, both the German president of the German-Russian town twinning and about 2/3 of the city leaders had campaigned for an official continuation of international understanding, said Harras. Among the supporters are the mayors of the major German cities of Berlin, Hamburg, Essen, Dresden and Stuttgart. According to Harras, they want to stick to the town twinning for the time being.

The city of Cologne, on the other hand, would have frozen its partnership with Volgograd, said Harras. However, the mayor supports the fact that the contact between the two cities is continued informally. The association may continue to support the former forced laborers in Volgograd, explained the chairwoman of the town twinning association. According to Harras, the club in Cologne is also active against the growing “Russophobia” and the racism associated with it.

All speakers at the rally expressed concern about growing militarism in Germany and called for a peaceful dialogue with Russia. The rally was mostly peaceful, only an anti-Putin banner calling for a criminal offense against the Russian President had to be confiscated by the police at the beginning of the event.

After the peace movement was defamed as a right-wing transverse front in the peace winter of 2014, this Easter march gave hope for peace and dialogue again – also within the movement.

More on the subject – #APanzerForPutin: This is how Italians slander about the information war against Russia