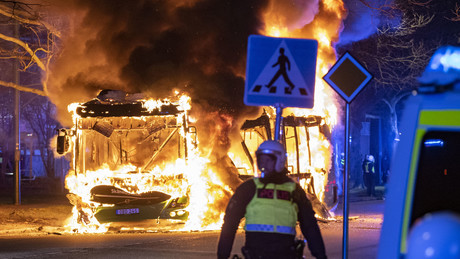 After the right-wing extremist rallies were approved by the police, riots broke out again in Sweden on Sunday night. Several vehicles were set on fire.

A bus caught fire in Malmo after strangers threw a burning object at the vehicle. This was reported by the broadcaster SVT. The passengers were able to exit the bus in time. Other vehicles and several garbage cans were also set on fire. Stones and Molotov cocktails were thrown at the police.

The background is several rallies by a well-known right-wing extremist that were approved by the police. Earlier there had been riots in some cities after police allowed right wing gatherings to burn the Koran.

Malmo Police Chief Petra Stenkula said it was sad that freedom of expression had become a “passport” for such riots. Luckily there were only a few minor injuries during the night. A 16-year-old was arrested.

In the city of Örebro in the south of the country, several police cars were set on fire on Good Friday. About a dozen police officers were injured in riots there. There were also riots in the capital Stockholm.