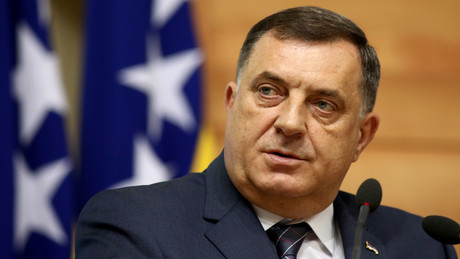 A leading Serb representative in Bosnia-Herzegovina criticized the political pressure from Western states on Bosnian Serbs and Serbia to join anti-Russian sanctions.

After a meeting with Serbian President Aleksandar Vučić, Bosnian Serb politician Milorad Dodik said the West was ready to undermine the status of the Republic of Srpska and Serbia with “silent sanctions”. In doing so, he wanted to try to influence their political stance to join the Western sanctions against Russia. This is reported by the Bosnian Serb news agency SRNA. Dodik, who is a member of the State Presidency of Bosnia and Herzegovina, reiterated that the Republika Srpska, an entity of Bosnia and Herzegovina, is not ready to join any sanctions against Moscow.

Dodik explained that one must understand the present time, namely the fact that the western world insists on other states to support their policy towards Russia, regardless of what policy the Republic of Srpska and Serbia actually intend.

After meeting the Serbian President, he told journalists:

Dodik strictly opposes the Republic of Srpska joining any EU sanctions against Russia.

Dodik reiterated on behalf of the Bosnian Serbs:

“Our people have brotherly relations with both Russians and Ukrainians. We have a large Ukrainian community in the Republic of Srpska and we work very well with them. We cannot take sides and will remain neutral.”

The foreign policy approach pursued by the Republika Srpska enables Bosnia-Herzegovina to avoid being classified as an “unfriendly country” by Russia. In addition, the country’s citizens and entrepreneurs could obtain natural gas from Russia at reduced prices.

More on the subject – Chinese ambassador: NATO has become the “number one hitman” in Washington’s service