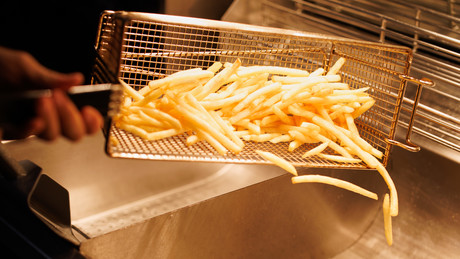 The Ukraine war brought the export of sunflower seeds from Ukraine to a standstill. The food industry must now switch to substitute products. McDonald’s now uses a mixture of different vegetable oils.

Companies in the food industry are currently feeling the effects of the lack of cooking oil. Large corporations such as McDonald’s have therefore already changed their cooking oil mixture for the preparation of French fries. “We use a vegetable oil mixture to fry our fries – including sunflower and rapeseed oil – with sunflower oil only making up a small part,” a spokeswoman for McDonald’s Germany told the dpa.

And the bottleneck resulting from the Ukraine war is likely to continue. Since Ukraine is the largest supplier, experts do not expect the situation to improve for the time being. A spokesman for the Association of Oilseed Processing Industries (Ovid) underlined:

“For sunflower oil, Ukraine is the most important supplier in the world.”

More than half of the world’s sunflower oil exports come from the Eastern European country. In Ukraine, so-called crude oil has so far been produced from sunflower seeds and shipped across the Black Sea, exports have come to a standstill because of the war. “This will not improve in the foreseeable future,” said the Ovid spokesman.

Sunflower oil has been largely sold out in German supermarkets for weeks. But the shortage has long since affected large companies as well. However, the lack of sunflower oil does not mean that citizens have to do without fries, bratwurst, donuts and other fried foods. Rapeseed oil is a suitable substitute and – unlike sunflower oil – there is no risk of shortage. “There’s no problem with rap,” says the Ovid spokesman. Because in Germany, France or Poland, rapeseed is grown on almost a million hectares each.

“Stopping gas supplies would have a massive impact on food production. The food industry is the second largest industrial gas consumer in Germany after the chemical industry. […] We wouldn’t go hungry because of this, but there would be major production losses that consumers in the supermarkets would feel.”

The largest gas consumer in the food industry is the dairy industry, followed by the meat industry. Then come the fat, oil, bread and sugar industries, but also the bakery and meat trades. Works councils have already warned, said Zeitler.

Accordingly, gas is primarily required as process energy in the food industry. “To produce food, a lot of energy is required for drying, boiling or cooking. The same applies to cooling to preserve the food,” said Zeitler.