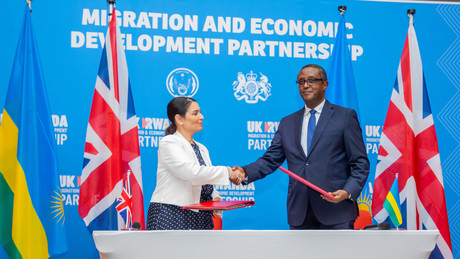 London has signed an agreement with Rwanda that provides for asylum applications from illegal immigrants to Great Britain to be processed in the African country in the future. However, there is also criticism of the project.

Britain wants to send migrants to Rwanda while their asylum applications are being processed. According to its own statements, the conservative government is trying to deter economic refugees from the dangerous and illegal crossing across the English Channel and to put a stop to smugglers. In the straits between Great Britain and France, the British Navy is to take action against people smugglers, as Prime Minister Boris Johnson announced on Thursday. Among other things, it is to receive several new patrol boats for this purpose.

British Home Secretary Priti Patel signed the asylum seekers’ agreement with Rwanda’s Foreign Minister Vincent Biruta in the Rwandan capital, Kigali. The five-year program will distribute UK migrants to communities across Rwanda. According to Rwandan law, they should enjoy full protection there, have equal access to employment and be included in the health and social services, according to the representatives of both sides.

“Relocation applies to illegal entry into the UK. Criminal gangs are smuggling people into Europe, resulting in loss of life. Relocation will help asylum seekers resettle and rebuild their lives. Global systems have at the Management of the migration crisis failed.”

The minister called the deal the biggest reform of Britain’s immigration system in decades.

Activists and the opposition were outraged by what they saw as a “cruel and mean” plan. Critics also accuse Johnson of wanting to distract attention from the “Partygate” affair in Downing Street ahead of the important local elections in England.

The UN High Commissioner for Refugees (UNHCR) warned that the plans “contradict the spirit and text of the Geneva Refugee Convention”. People fleeing war or persecution should not be sent abroad like goods for further processing, said UNHCR representative Gillian Triggs. Britain has a duty to grant such people access to asylum.

Sending migrants some 4,000 miles away to East Africa “will hardly deter them from coming, it will only lead to more human suffering and chaos,” said Enver Solomon of the Refugee Council. He estimates the cost to taxpayers at £1.4 billion (€1.7 billion) a year. The British Red Cross was also concerned about the plans to “send traumatized people halfway around the world”. Rwanda must agree to every refugee Britain sends to Africa.