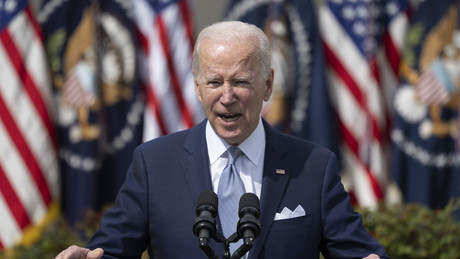 According to a US broadcaster, US officials are concerned about Biden’s allegations of genocide against Moscow regarding Ukraine. The current information from the US secret services would also not support such an accusation.

US President Joe Biden’s accusation earlier this week that Moscow was committing “genocide” in Ukraine has sparked concern among White House officials and has not been confirmed by US intelligence agencies, NBC News said Friday, citing senior US government officials reported.

The allegation of genocide “has not yet been corroborated by information collected by US intelligence agencies,” the broadcaster said in a statement.

The news portal quoted two State Department officials as saying that Biden’s comments would make it more difficult for the agency to “credibly carry out its job” since it is the department’s job to formally prosecute genocide and other war crimes. A US intelligence official is also quoted as saying:

“Genocide involves the aim of destroying an ethnic group or a nation, and that’s not what we (in Ukraine) see so far.”

However, US news services are concerned that Russia’s future actions “could amount to genocide,” NBC added.

On Tuesday, in a domestically-focused speech in the state of Iowa, Biden accused Moscow of trying to “eradicate the idea of ​​being Ukrainian.” The statement came after Kyiv claimed that Russian forces had killed civilians in Bucha and other towns near the Ukrainian capital. Mass graves and bodies with signs of execution were discovered in the area from which Russian forces retreated in late March.

Moscow denies that its armed forces are responsible for the deaths of civilians in Bucha or elsewhere in Ukraine and accuses Kyiv of waging a smear campaign.

Before the start of its offensive, Russia had accused Ukraine of committing “genocide” against the people of Donbass. This claim was denied by both Ukraine, the US and UN Secretary-General António Guterres.

Russian troops invaded the neighboring country at the end of February after Ukraine failed to implement the terms of the Minsk agreements signed in 2014 and Moscow also recognized the Donbass republics of Donetsk and Lugansk and signed a mutual assistance pact with them. The Minsk agreements brokered by Germany and France were intended to give the breakaway regions a special status within the Ukrainian state.

The Russian government is demanding that Kyiv officially declare Ukraine as a neutral country and thus never join the US-led NATO military bloc. Kyiv, on the other hand, insists that the Russian offensive was entirely unprovoked and has also denied claims that it planned to retake the two republics by force.

More on the subject – Report: US wants to support Ukraine with heavy weapons and intelligence