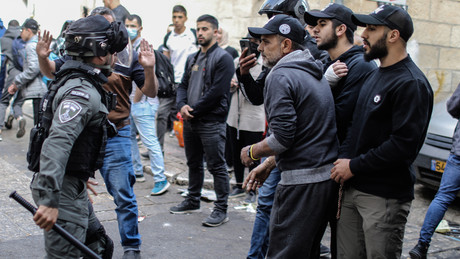 Fighting has broken out again in Jerusalem between Palestinians and Israeli security forces. While the Israeli side blames the Palestinians, the Palestinians speak of an attempted storming of the mosque grounds by Jewish groups under police protection.

A confrontation between Israeli security forces and Palestinians has broken out again in Jerusalem after Israeli police officers entered the area around the al-Aqsa Mosque, the Hürriyet Daily News reports. Two days ago, serious clashes broke out on the Temple Mount in the city that is holy to the three monotheistic religions.

The Israeli police justified their action, in which they cleared the area in front of the mosque of Palestinians, with the fact that they wanted to allow Jews to visit the holy site on a routine basis. The Israeli security forces also accused the Palestinians of collecting stones and erecting barricades in preparation for possible clashes. The police said they wanted to enforce freedom of religion for both Muslims and Jews.

However, a correspondent for the Arabic channel Al Mayadeen, which is located near the Lebanese militia Hezbollah, reported that it was an attempt by Israeli settlers under the protection of the Israeli security forces to storm the area. The settlers reportedly wanted to get into the southern prayer hall of the mosque, which is Islam’s third holiest site.

According to Palestinian rescue workers, ten people have been injured in the current clashes.

WATCH: Palestinians attacking an Israeli bus with rocks just outside Jerusalem’s Old City. Passengers on board were on their way to prayers at the Western Wall.pic.twitter.com/SoMhfg99sq

Meanwhile, the Iranian Revolutionary Guard declared its “unwavering support for Palestine” on Friday. The latest “Israeli acts of aggression” following “the recent operations by young and faithful Palestinians against the Zionist regime” show that Tel Aviv fears the emergence of a “modern intifada”. The Iranian elite unit also pointed out that the “Israeli desecration” of the al-Aqsa Mosque and the “brutal attacks on defenseless believers” were doomed to failure and would not undermine the “heroic uprising of the intifada fighters”. The uprising will force the “Zionists to face even more serious nightmares and challenges”.

A year ago, after clashes between Palestinian demonstrators and Israeli police officers in Jerusalem, an eleven-day war broke out between the Islamist Hamas and the Israeli army.

East Jerusalem has been a contentious issue between Palestinians and Israelis since Israel captured the area in the Six Day War in 1967. While Palestinians claim the district as the capital of a future separate state, Israel annexed the area shortly after the conquest in an internationally unrecognized move.

Particularly controversial is the status of the Temple Mount, on which the al-Aqsa Mosque is located, which has special meaning for Muslims. But the Israelite temple is said to have also been located on the site in antiquity. While most Jewish currents oppose a restoration of the Temple and take no steps to change the current status quo, nationalist-fundamentalist Jewish groups call for the Temple Mount to be re-established as a Jewish place of worship.

For years, Jewish visitors were actually forbidden from entering the area for prayers to avoid tension, but recently some radical Jewish groups have repeatedly attempted to enter the Temple Mount area under police protection, which Palestinians perceive as a provocation, as they fear it as a step towards taking over al-Aqsa Mosque, which Israel denies.