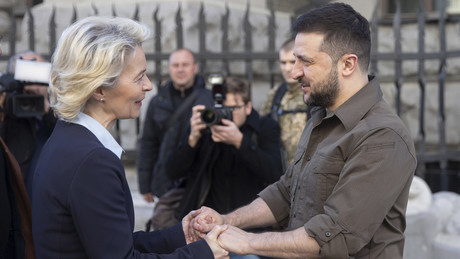 The President of the EU Commission, Ursula von der Leyen, has called on the EU member states to step up the pace of arms build-up in Ukraine in the war with Russia. At the same time, she stated that Ukraine itself decides on possible peace terms with Russia.

The President of the European Union, Ursula von der Leyen, said in an interview with the Bild am Sonntag that she wanted EU countries to deliver arms more quickly to Ukraine. She also announced a further tightening of sanctions against Russia. The EU leader said she wanted to do everything to enable Ukraine to “repel this brutal and unjustifiable aggression by Russia,” adding:

“I don’t differentiate between heavy and light weapons. Ukraine must be given what it needs to defend and what it can handle.”

Von der Leyen pointed out that the European bloc will spend 1.5 billion euros on upgrading Ukraine.

When asked whether the German government was abandoning Ukraine because it was very hesitant to deliver tanks, the EU Commission President replied:

“For all members, if you can, you should deliver quickly. Because only then can Ukraine hold its own in its acute defensive struggle against Russia.”

Von der Leyen also stated that the sanctions would work against Russia:

“The sanctions eat their way deeper into the Russian economy week by week. (…) Russia’s state bankruptcy is only a matter of time. With this war, Putin is also destroying his own country and the future of its people.”

According to the President of the European Commission, the next package of sanctions that is currently being planned will probably target Sberbank, which controls 37 percent of the Russian banking sector, and the energy sector. Brussels is planning “clever mechanisms” so that oil can also be included in the sanctions in the future.

“Never before has the EU acted as united, determined and energetic as it is now. Germany has played its part in this.”

The EU leader reiterated that Ukraine is capable of winning the war with Russia. And she added:

“Winning means that there will be peace in Ukraine again. Ukraine will decide on its own under what conditions.”

At the end of the interview, von der Leyen warned that the war could last for months or even years.