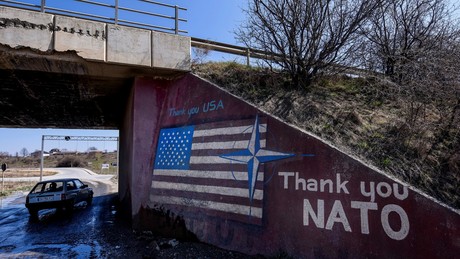 In an interview with RTV Pink, Serbian Interior Minister Aleksandar Vulin described the British authorities’ delivery of arms to Kosovo as an unfriendly move towards Belgrade. He explained:

“I think the UK supplying arms to the Kosovar Albanians is an unfriendly move because you cannot arm terrorists and hope for peace. I am very concerned.”

Vulin stressed that Kosovo does not have an army, but that it is being built and armed with Western support. He said:

“According to UN Security Council Resolution 1244, the only armed force in Kosovo and Metohija is a contingent under the KFOR umbrella of NATO, there are no others, and you create an army, arm it, give it armored vehicles, anti-tank systems, drones and offers their training.”

In his view, the only purpose of Kosovo’s rapprochement and integration into NATO is “to provoke Serbia”.

Earlier, local media reported that London handed over 50 Javelin anti-tank guided missile complexes and NLAW anti-tank guided missiles to Pristina. In addition, it is planned to train Kosovo fighters in the operation of these systems. The delivery of these weapons was said to be the implementation of an agreement reached in late February between British Prime Minister Boris Johnson and Kosovar Prime Minister Albin Kurti.

striving for the alliance

Among the NATO member states, in addition to the United Kingdom, the United States is also active in defense cooperation with Kosovo. The two sides frequently conduct joint military exercises. On March 31, the Pentagon reported that US troops from the Special Operations Group and Kosovo security forces were “participating in training activities in Pristina.”

Later, on April 11, the US Special Operations Command in Europe reported on its Twitter page that its special forces had attacked targets during bilateral training exercises with the Kosovo Security Forces in Pristina. The US command emphasized:

“Relationships with our Balkan allies and partners are a top priority for Special Operations Forces in Europe.”

Against the background of the escalating confrontation between Belgrade and Pristina last fall, the US Department of Defense decided to participate in the capacity building of the Kosovo security forces.

Russia then spoke out against Western-backed efforts to form a “Kosovo army” and described such measures as a serious problem. As Russia’s Permanent Representative to the UN Vasily Nebensia said at a UN Security Council session, such ideas “must be decisively thwarted” because Western countries’ indulgence in the actions of the Kosovar side could lead to an open clash between Pristina and lead Belgrade.

Aleksandar Vučić, the Serbian President, in an interview with the Tanjug news agency published on February 19, did not rule out that NATO could include Kosovo in its ranks in six months’ time, adding four EU countries – Greece, Slovakia, Romania and Spain – to force it to recognize its independence.

Later, against the background of the Russian special operation in Ukraine, Pristina began to actively urge NATO to include Kosovo in the bloc. On February 27, Kosovar Defense Minister Armend Mehaj declared on his Twitter page that the rebel province’s accelerated accession to the North Atlantic Alliance was “urgently necessary” in order to ensure stability in the region and beyond. He also called on Washington to set up a permanent military base in Kosovo “to consolidate the peace”.

On March 5, Mehaj reiterated on Twitter that Kosovo wants to join NATO to “promote peace and stability.” He also called the Serbian Interior Minister’s statement that Kosovo’s membership in the alliance poses a threat to Belgrade “unacceptable”. The Minister of Defense of Kosovo said:

“Kosovo is committed to peace and rejects any form of aggression.”

Two days later, Mehaj declared that the province would remain “a staunch friend and ally of the United States and NATO countries.” He wrote:

“Democracy and peace are our common values.”

On April 4, Mehaj declared that the Republic of Kosovo “wants to become part of a stronger alliance and contribute to peace.”

“Flying Under the Radar”

According to experts, against the background of US efforts to strengthen the defense system of the rebel province, London’s move to send arms to Kosovo looks like a desire to increase tensions in the region by increasing pressure on Serbia. Pavel Kandel, a leading researcher at the Institute for Europe of the Russian Academy of Sciences, told RT:

“The UK is flying under the radar, sending arms to the Kosovar Albanians and taking advantage of the unstable situation in the world and the fact that the world’s attention is now focused on the Ukraine crisis.”

He did not rule out that by supplying arms to Pristina, London hopes to provoke an armed incident in the region. Kandel justified this as follows:

“Assuming a hypothetical scenario of armed conflict between Serbia and Kosovo, which the West is pursuing, the Javelin and NLAW anti-tank guided missiles would be useful for Pristina. Belgrade, for example, has Soviet-made tanks. Kosovo is less well equipped in this regard .”

As soon as the deliveries are completed, he believes Britain, in consultation with Washington and Brussels, will increase the pressure on Serbia. The expert said:

“The West needs this to make the Vučić government more compliant. The Western world seems to think that now is the best time to take control of Belgrade.”

At the same time, Kandel admits that numerous requests by the Kosovo leadership to admit the rebellious province to NATO could be supported by the British. The analyst argued:

“The alliance itself does not need them at all, especially since a number of NATO members still do not recognize the independence of Kosovo. Under these conditions, it is practically impossible to include them in the bloc. The statements by the Kosovar defense minister are intended to draw attention to the unrecognized republic in order to obtain at least some advantages from the Western patrons, e.g. visa-free travel.”

MGIMO professor Jelena Ponomarewa also sees the British arms deliveries to the Kosovar Albanians as an attempt to escalate the conflict and aggravate the situation in the region. Speaking to RT, she emphasized:

“It is a continuation of the events of 1999, when NATO troops separated the historic homeland of the Serbs and created a drug-terrorist entity. Kosovo must be seen as a project in which the big players, primarily the countries of the North Atlantic Alliance, which is committed to international terrorism and crime. London provokes Serbia into retaliatory measures with arms deliveries.”

She also believes that British arms shipments to Kosovo indicate that London is trying to “play against Moscow” in the Serbian region. Ponomarewa explained:

“The British are fighting against the Russian Federation, including in the Balkans. By arming the Albanians, they are showing the Serbs that they are ready to do the most unpleasant things. The enormous pressure put on President Aleksandar Vučić because of Serbia’s support for exercised by Russia is obvious.”

According to her, the Kosovan authorities dream of admitting the province to NATO, but all these demands are unlikely to be met. The expert said:

“There has never been a precedent where a state that was not recognized by almost all NATO countries became part of NATO. Also, the Kosovan authorities simply do not have the money to allocate 2 percent of GDP to the bloc. The alliance will never embrace such problem areas, but it will continue to expand on the topic of supposedly possible acceptance in order to put pressure on Serbia in this way.”