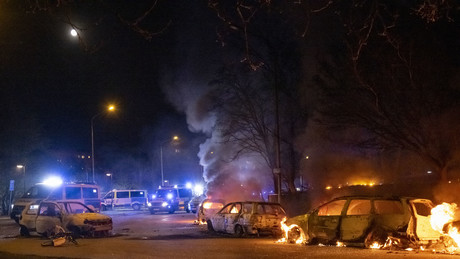 Sweden was rocked by a series of violent protests and riots over the Easter weekend. The triggers were rallies by a right-wing extremist, during which a Koran was burned in two cities and was to take place in other cities.

Numerous riots broke out in Sweden over the Easter weekend after a well-known right-wing extremist publicly burned the Koran in two cities. In Malmö, Norrköpping, Linköping and Stockholm, rioters set fire to a bus, several other vehicles and even a school, Swedish broadcaster SVT reported. Stones and Molotov cocktails were thrown at police officers and some of them were purposefully surrounded.

The background to the riots are rallies by the well-known right-wing extremist Rasmus Paludan in Jonkoping and Stockholm, during which he burned the Koran, the Muslim holy book. The police approved this and several other events of Paludan. This in turn triggered fierce criticism and counter-demonstrations. Some of the planned Koran burnings ultimately did not take place or were postponed after several police cars had already burned down on Maundy Thursday and Good Friday.

In Malmö, a bus caught fire on Easter Sunday night after someone threw a burning object at the vehicle. The following night, rioters set fire to a school, car tires and garbage cans. In the southern Swedish town of Norrköpping, the police defended themselves, according to their own statements, with shots. Three people were injured. According to the Swedish police, a total of 26 police officers and 14 other people involved were injured by Easter Monday. 200 violent rioters were involved, it said.

The riots are crimes against society, Swedish police chief Anders Thornberg said at a press conference on Easter Monday. There are indications that criminal gangs were involved in the riots and took advantage of the situation. There are also indications that violence has been incited from abroad. Nevertheless, it was initially unclear how and why the situation had escalated. The investigation should continue, and further arrests could follow. By Easter Monday, the police had already arrested 40 people, according to the authorities, mostly younger people.

Swedish Justice Minister Morgan Johansson also condemned the riots. He stressed on Monday that the violent criminals must be punished. Freedom of expression applies in Sweden. Those who do not accept this, but become violent, must also be prepared to face violence, said the social democratic politician. He continues to have full confidence in the police. It must now be examined where and how the emergency services should be strengthened.

The right-wing rallies and their consequences also caused a stir far beyond Sweden: “This matter has a serious impact on relations between Swedes and Muslims,” ​​Iraq’s foreign ministry warned at the weekend. This applies equally to Arab states and European countries with Muslim societies. Iraq urged the government in Stockholm to refrain from actions that could divide society or hurt religious feelings.

The influential Shia cleric Muqtada as-Sadr also appealed to the Swedish government to take a stand against attacks such as Paludan’s Koran burning in order to preserve the peace.

More on the subject – Chechens in the Berlin underworld