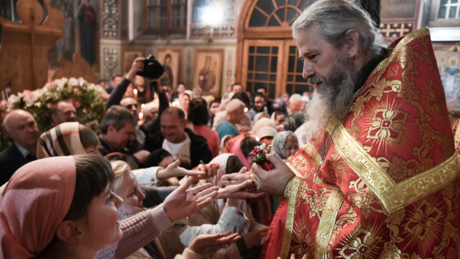 The Russian National Defense Management Center informed on Monday about Ukrainian plans to carry out bloody provocations with many dead on Orthodox Easter a week after the local one in order to blame the Russian side.

The Kiev regime is planning “monstrous provocations at Easter” next weekend. The head of Russia’s national defense control center, Mikhail Mizintsev, declared on Mondaythat on the night of April 24, orthodox churches in the Zaporozhye, Nikolayev, Odessa, Sumy and Kharkov regions will be shelled with mortars and that the Russian army will be blamed for this.

Mizintsev also said that Russia has operational evidence of these plans by the Ukrainian side. Ukraine wants to blame Russian soldiers for the deaths of many civilians, the head of the center said.

According to the Russian Center for National Defense Management, more than 70 mobile groups of Ukrainian nationalists have been prepared to perform on the Orthodox Easter, which will be celebrated a week later than in the West this year. They will travel in vans and jeeps accompanied by western journalists.

According to Russian information, the accompanying journalists are needed so that the western media can immediately start spreading fakes about the “atrocities committed by the Russians” on the holy holiday.

“The forthcoming provocations by the Ukrainian authorities show their complete indifference to the fate of their own citizens,” Mizintsev concluded.

The Head of the Synodal Department of the Moscow Patriarchate for Relations with Society and the Media Vladimir Legoida reacted to these warnings, saying that “one cannot imagine anything more inhumane” than making this happy holiday “an instrument of escalation of the conflict”.

Such plans, the representative of the Russian Orthodox Church wrote on his Telegram channel, can only come “from forces interested in intensifying fratricidal hatred and hostile to the Russian and Ukrainian people alike.”

The secret service information that has now become known cannot be checked independently.