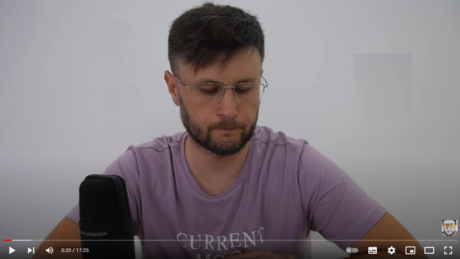 Kiev journalist and musician Taras “Tarik” Nesalezhko has emerged after 40 days of silence in Russia and told how he managed to survive the wave of terror against “pro-Russian” opposition figures and flee the country. His friends are still in acute danger, the rapper added in another video.

As RT DE mid-March twice about the disappearance of prominent members of the opposition without a trace, intellectuals, politicians and journalists in Kyiv reported, we did not mention Taras “Tarik” Nesalezhko by name. Of all the names of those who were kidnapped in the first two weeks of March, some by the Ukrainian secret service SBU and others by unknown persons, the German reader would have said his name the least, and from whom there is still no sign of life, with a few exceptions. But now the journalist is unexpectedly taking center stage, as he was one of the few pro-Russian celebrities who managed to survive the wave of terror unscathed and to flee Ukraine. Now that he’s in Russia and safe, Nesalezhko is back in the public eye and has some stories to tell about conditions in the Ukrainian capital.

The Ukrainian audience has known Nesalezhko since 2015 as a rapper who took up social issues and wrote lyrics critical of the Maidan. He made a fortune with music and bought into the KRT television station, which has existed since April 2003 and is described as a “religious television station” in the German Wikipedia version. Under the artist’s direction, the station offered a much broader program and developed into one of the platforms on which oppositionists in Ukraine who were critical of the Maidan could still have their say.

KRT was also the first Ukrainian television channel to be banned and shut down as part of Zelensky’s campaign against critical media. This decision was announced by the Ukrainian media regulator on July 30, 2020. It was justified with the broadcast of the Victory Parade on May 9 from Minsk, although the broadcaster had made every effort to make all Soviet symbols invisible. In addition, a guest on a talk show reportedly said he was “homophobic” when he invited homosexual fighters from the far-right Azov battalion.

Six months later, the big blow to opposition media in Ukraine followed, when three opposition television stations were banned and shut down in one day.

After his station was banned, Nesalezhko became involved as a blogger and interviewer on YouTube. Among other things, he presented talks on current topics with the political scientist and intellectual Dmitrij Dzhangirow several times a week. During the interviews, Nesalezhko always remained invisible behind the camera, only his voice was heard.

In mid-March, when Dmitry Dzhangirov was forced by strangers to record a video speech that was not typical for him and then abducted, Nesalezhko also disappeared. While Dzhangirov’s YouTube channel and Facebook account have since been used by strangers for clumsy Ukrainian war propaganda, his interviewee’s channel has not been renewed for weeks. Despite all efforts, information on the fate of the journalist could not be obtained.

On April 12, Tarik Nesalezhko surprised his supporters with one, to everyone’s relief newly uploaded video. In it he said that he managed to go into hiding during the “difficult phase” and then left Ukraine illegally. He lived with good friends for 40 days, threw away all SIM cards and changed his appearance as much as possible. That made it easier for him to drive out of town, during which he was checked several times at roadblocks.

However, the picture he painted of the current situation in Ukraine is bleak:

“It is currently enough not to be a supporter of Zelenskiy to be arrested.”

According to the journalist and musician, this clouded over the joy at one’s own flight and the anticipatory evacuation of one’s own family from the country:

“There remains a feeling of helplessness because there is nothing I can do for my friends who are currently being held in the basements of the Ukrainian Gestapo.”

One of Nesalezhko’s music videos:

Of course, in the comments, Nesalezhko was immediately showered with questions about the fate of the better-known members of the opposition, including the aforementioned Dmitry Dzhangirov. He said in one of the later videos that “those I worked with” were still alive, but in order not to aggravate their situation he was not allowed to say where they were.

Lawyer Tetjana Montjan recently made a similar statement: she is forbidden from providing information on the whereabouts of a certain disappeared person, since their survival depends on their silence. It may be some time before we learn the full truth about the wave of terror that hit Kyiv in mid-March 2022.

According to human rights activists and independent observers, the number of celebrities who have disappeared in Ukraine since early March has already exceeded a thousand. The disappearance of the Chilean Gonzalo Lira, who had been reporting from Kharkov on social networks for the past few weeks, became known on Monday. There is currently no sign of life from him either.

More on the subject – Terror in Ukraine: More journalists and intellectuals disappear without a trace