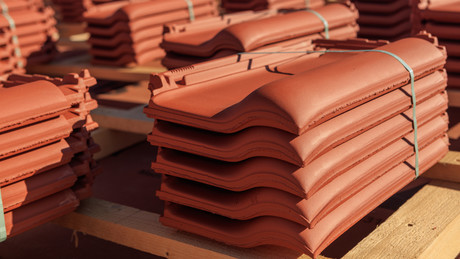 The Ukraine war and the threat of a ban on imports of Russian natural gas are causing roof tile prices to explode. The increased demand and order acceptance stops by manufacturers could soon lead to a bottleneck.

Persistently high demand, limited supply and significantly increased energy costs are leading to significantly higher prices for roof tiles, according to information from the industry. According to the Central Association of the German Roofing Trade (ZVDH) in Cologne, there was a noticeable price increase at the beginning of the year. Further price increases are to be expected by May, so that clay roof tiles could then be 30 to 40 percent more expensive than at the end of last year.

According to the information, the production of roof tiles is extremely energy-intensive because very high temperatures of 1,000 degrees Celsius or more are required. In addition, there is an order acceptance stop for some manufacturers, which means that retailers are currently unable to order clay roof tiles from the suppliers concerned, according to the ZVDH.

According to the Federal Association of the German Brick and Tile Industry in Berlin, a strong increase in demand for clay roof tiles has been observed since the fourth quarter of 2021. The reason for this is primarily the good construction sector. The general manager of the federal association, Matthias Frederichs, emphasized to the dpa:

“The situation has worsened again due to the Ukraine crisis and an impending import ban on Russian natural gas.”

Due to the high demand, some companies would have to accept temporarily long delivery times. In some cases, no new orders could even be accepted, said Frederichs. In view of the high energy costs and increasing delivery bottlenecks, it is unavoidable for the brick and tile industry to pass on cost increases. He argued:

“Basically, one can say that the brick and tile industry is currently in an enormous area of ​​tension between on the one hand very high construction demand and on the other hand a completely unclear natural gas supply for brick production.”

The situation could worsen if there were no more Russian natural gas deliveries to Germany. In the event of a “significant deterioration in the supply situation”, it is planned that the federal government will call for the third and highest level as part of the gas emergency plan. Then the Federal Network Agency regulates the gas distribution. This is to ensure that private households, for example, but also hospitals or gas-fired power plants will continue to be supplied – but brick manufacturers may no longer be supplied.

More on the subject – Record producer price gains recorded in US