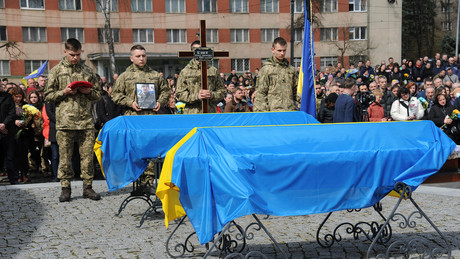 The number of casualties on both sides in the Russian-Ukrainian conflict cannot be independently verified at this time. Both sides give different information. The Russian Defense Ministry on Monday released the list of dead soldiers at a barracks in Mariupol, claiming the documented number of Ukrainian casualties is more than 23,000.

In the publication, a total of seven text documents can be clicked and downloaded. As of March 29, 2022, the first three contain the full names, ranks, functions and the dates and circumstances of the death of 122 military personnel and members of the “Azov” regiment. The other four contain the names and ranks of soldiers and officers who are permanently unfit for action due to injuries.

Judging by the information on the circumstances of the death and wounding, these are soldiers who fell or were wounded in Mariupol between the beginning of March and March 29, 2022.

The Ministry of Defense did not provide any information on the origin of the lists of names. Presumably, these were captured in the course of the advance of Russian units and units of the Donetsk People’s Republic in Mariupol.

To what extent it is possible to draw conclusions about the total losses of the Ukrainian side from the submission of the list of names of a single barracks for a partial period of time and in what form the losses of more than 23,000 military personnel now claimed by the Russian side are documented cannot currently be independently verified.

More on the subject – Mariupol survivors report: “Azov fighters are to blame for 85 percent of the destruction.”