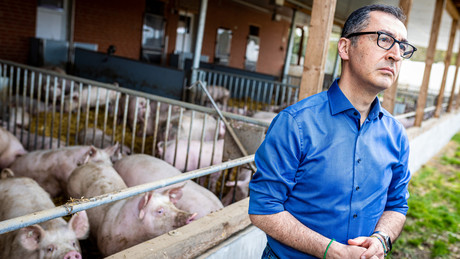 Food Minister Özdemir has warned of a global hunger crisis. He blames the Kremlin for this: It is pursuing “a starvation strategy.” However, he does not provide evidence for his allegations.

According to Federal Food Minister Cem Özdemir, arms deliveries to Ukraine should be intensified in order to avert a global famine. “Russia’s war against Ukraine is increasingly turning out to be an attack on the international community,” the Green politician told the Westdeutsche Allgemeine Zeitung:

“That’s why it’s so important that the West supports Ukraine with more effective weapons – and Germany shouldn’t be exempt from that.”

“Putin’s strategy is to stir up conflicts, and his way of doing this is to increase hunger,” Özdemir said. This could have a long-term impact on the productivity of Ukrainian agriculture and thus on world supplies. The Green politician justified his claim with “alarming news from Ukraine, where Russian troops are apparently also deliberately destroying agricultural infrastructure and supply chains”. However, Özdemir did not name a verifiable source for his allegations.

Putin’s “starvation strategy” will cause problems in particular in countries where many people already have problems with food security, the minister said. African countries are particularly affected.

The situation must be addressed on a global level. “Here we have to agree on fundamental, structural questions of agricultural and food policy worldwide.” Therefore, the World Food Committee of the United Nations must play a central role, Özdemir demanded.

The task of the federal government is now to increase humanitarian aid for Ukraine from 64 million to 370 million euros. With the increase in funds, the work of the World Food Program could then be massively expanded, the minister explained. In addition, 430 million euros will be made available for global food security, of which 150 million euros will be earmarked for the special initiative “One World, No Hunger”.

Just a few weeks ago, Özdemir had addressed the citizens with a view to the food supply situation in Germany appeals, not to build up unnecessary stocks. The supply was guaranteed, according to the Minister of Food at the time. He spoke to representatives of the trade and they said “very clearly, we have the situation under control, the supply is guaranteed!”

More on the subject – Macron warns of ‘unprecedented food crisis’