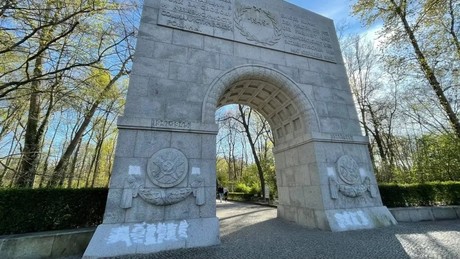 It is the second incident within a few days, and again the Soviet memorial in Treptow was defaced. The Russian embassy reminds the German authorities of their obligations; but she also asks for help in recording such violations.

In the night from April 17 to April 18, the Soviet memorial in Treptow was desecrated again. The memorial is not only a monument, but also a burial place. The Russian embassy is outraged by this communicated.

“A protest note has been sent to the Foreign Office in which we call for the consequences of the desecration to be eliminated, the circumstances of the desecration to be determined and the perpetrators to be held accountable. We have again demanded that the German authorities take exhaustive measures to prevent further such incidents according to the Russian-German War Graves Agreement of December 16, 1992.”

This is the second time within a few days that the memorial in Treptow has been attacked.

Something similar is currently happening in many other places where the Soviet liberators are commemorated or where there are war graves of the Red Army. In the run-up to the Victory Day celebrations on May 9, more acts of vandalism are likely to be expected; especially since even the Ukrainian parliament shows no respect for the dead and welcomed the latest attack.

The Russian embassy, ​​certainly also bearing in mind this fact, does not stop at a request to the German authorities, but also addresses the public.

“We ask all committed citizens who witness desecration of Soviet war graves and memorials to immediately contact the Russian Embassy in Germany (by email to sos@russian-botany.de) as well as the Russian consulates-general about the incidents, stating the place and time.”

The first extensive desecration took place (despite police surveillance) on the night of April 6th/7th. Among other things, with slogans like “Death to all Russians”:https://t.co/VqXJC6JUmE