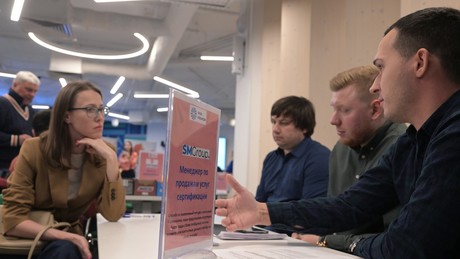 More than 200,000 people in Moscow are at risk of unemployment because foreign companies have shut down operations. The Moscow authorities will offer temporary and public works to those who worked at these enterprises.

Around 200,000 people in Moscow are at risk of losing their jobs because foreign companies have stopped working in Russia. This comes from a Message on the website of the mayor of the Russian capital, Sergei Sobyanin.

In order to mitigate the consequences, the Moscow mayor’s office has developed a program to support employees threatened with dismissal. The program will support 58,000 of the aforementioned workers. 3.36 billion rubles (EUR 38.6 million) will be allocated for its implementation, including subsidies from the state budget.

The capital’s program provides for the organization of temporary jobs for the workers who are currently on forced detention and who will receive compensation from their employer. It has been suggested that they be involved in completing archives, ongoing maintenance of equipment and other activities that allow them to generate additional income.

Budget grants for the temporary job offers are available to companies whose employees are at risk of being made redundant, as well as organizations willing to provide temporary jobs for employees of other companies.

Public works are also organized for workers who have lost their jobs but are not yet employed, including in public service centers, summer pavilions, parks and other facilities.

Companies and organizations offering such alternative employment can receive budgetary support for the integration of employees into their new jobs, including training at colleges, vocational training centers or corporate universities.

The Moscow Mayor’s Office estimates that more than 58,000 people who were employed in companies that have ceased operations are receiving job-search assistance under the program. Of these, around 12,500 people will be retrained and around 39,000 job seekers will be employed in temporary work and in the public service.

The Moscow city government also approved the allocation and payment of monthly allowances for children from needy families. Families whose average per capita income does not exceed the subsistence level in Moscow can receive these benefits. Depending on their income, the payment is either 50 percent of the child’s subsistence level, i.e. 8,087 rubles (92.88 euros) or 75 percent, which corresponds to 12,131 rubles (149.32 euros). At 100 percent, 16,174 rubles (185.72 euros) are paid out per month. April 1st was set as the start date.

To support small and medium-sized businesses, the authorities also approved a new program of discounted online loans for this target group. Entrepreneurs from all industries can get online loans at a preferential rate of 13.5 percent. The maximum loan amount is five million rubles ($60.000) and the interest rate subsidy is granted for nine months.

After the start of the Russian special operation in Ukraine and the imposition of sanctions by Western countries, foreign companies after foreign companies announced that they would cease operations or withdraw from the Russian market. For example, McDonald’s restaurants have closed indefinitely. The Swedish companies IKEA and the H&M Group, the software manufacturers Microsoft, Adobe and Cisco, the booking services Booking and Airbnb and other companies have also ceased operations.

Several production plants of foreign companies in Russia were also shut down, including the Hyundai car factory in Saint Petersburg, the Michelin tire factory in the Moscow region and the Fazer bakery and confectionery factories in Moscow and Saint Petersburg.

On April 12, a group of deputies from the United Russia party submitted a bill to the State Duma. This established the conditions and mechanism for the introduction of external management in Russian branches of foreign companies that had left Russia. According to the document, a company can be managed temporarily if at least 25 percent of the shares are owned by a citizen of a non-Russian country and the company is essential to the stability of the Russian economy. The authors pointed out that the main purpose is “to protect the interests of Russians, to save jobs and to support the economy”.