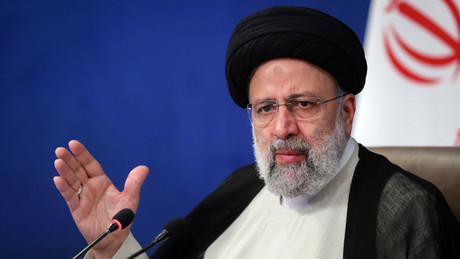 The Iranian President issued a sharp threat to the Israeli government. Tehran is observing Tel Aviv’s activities very closely in view of Israel’s attempts at detente with the Arab states.

Iranian President Ebrahim Raisi has warned Israel that even a small mistake will trigger “Iran’s response at the heart of their regime.” Iran is closely monitoring Israeli activities, the Iranian news agency Tasnim reported.

Speaking during the military parades held Monday in the country’s capital, Tehran, to mark the National Army Day, Raisi said Iran’s armed forces had upgraded their capabilities to such an extent that Iran’s military might was well known in the region.

The President highlighted the combat readiness of the Iranian armed forces and made it clear that Iran has the deterrent power to oppose any enemy movement. The Iranian leader added:

“Not a small movement of the enemy remains hidden from the keen eyes of the Iranian armed forces.”

Earlier in April, the Chief of Staff of the Iranian Armed Forces, Major General Mohammad Hossein Baqeri, said that all Iranian armed forces were ready to respond to any threat at any level with such determination and devastation that the “enemies of Iran” would regret taking hostile action against the Islamic to establish order in Iran.

The President reminded the Israeli government that Iranian security forces will monitor its activities while Tel Aviv pushes for normalization of relations with a number of countries in the region. Raisi explained:

“If they (the Israelis) make the slightest mistake, our response will be at the center of the Zionist regime and our armed forces will not leave them alone.”

The Iranian President also referred to the White House spokesman’s admission that unilateral sanctions against Iran had failed, saying such a fate awaited all enemies of Iran.

In a December 2021 statement, Raisi had warned “Iran’s enemies” that any military move against Tehran would elicit such a determined response from Iranian forces that the strategic balance would be significantly shifted.