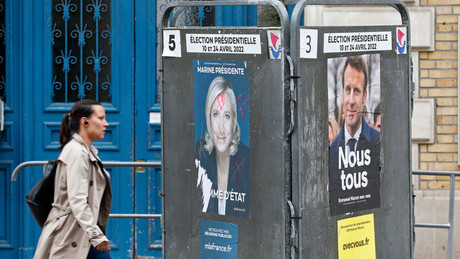 As in 2017, Emmanuel Macron and Marine Le Pen took the top two spots in the first round of the French presidential election. They will therefore face off in the second round on April 24th.

This confirms a strong trend, which has been consolidated from election to election in French political reality, and the first clear signs of which were seen in the 2005 referendum on the draft EU constitutional treaty: a deepening division between those behind the ” globalized elites”, i.e. the owning classes, and the working class. This “block versus block” division is not going away.

Whether welcomed or regretted, “class choice” is particularly characteristic of this choice. It is not for nothing that the current ruler of the Élysée Palace has been called the “president of the rich” since 2017, a bandage that constantly sticks to him both through the content of his politics and through his arrogant and contemptuous demeanor; and the blue-collar workers—those who are routinely tempted not to vote—form the great battalions of Marine Le Pen’s voters.

It should be noted that the third man, Jean-Luc Mélenchon, improved thanks to two categories. First, the “educated” urbanized strata who live in the center of the big metropolis and are open to globalization; and second, the – often young – citizens with a migration background, who do not form a homogeneous category.

Of course, the detailed studies that will appear in the coming months will clarify, nuance and shed light on this class division that characterizes the campaign posters of the second ballot. But they will not refute them. To put it figuratively, on the one hand, those who fear the “end of the world” (and want to “save the planet”) will rally around Macron; and on the other hand, the low-wage earners, who fear above all the “end of the month” (and the dismantling of our industry, especially heavy industry), identify strongly with its competitor.

Speaking in Strasbourg, the incumbent President said that the second round of the presidential elections was a referendum on Europe. In doing so, he tried to mobilize his camp, ie those who fear more than anything the disintegration and eventual demise of the European Union. It is the latter who continue to recite the old fact-disproved psalms of “Europe is Peace,” “Europe Protects Us,” and “United We Are Stronger.”

However, the current resident of the Élysée Palace is taking a risk: should he lose on April 24, he would have to admit that a majority of French people want to give up the principle of European integration. And even if he were elected with a slim majority, he would have to realize that almost every second voter not only questions the current European Union, but also the idea of ​​a political Europe.

For its part, the Front National (now Rassemblement National) never explicitly included exit from the EU in its agenda, even in 2017 when it was thought to be the case. This time, her candidate poured even more water into the wine with regard to the current campaign. Either they agree with the (false) self-evidence that such a perspective will deter the majority of voters and inevitably lead to failure, or they themselves remain convinced that the EU can be reformed from within – an illusion that is regularly shattered by the facts are disproved.

As a reminder, at the end of the 1990s three socialist prime ministers were in power simultaneously in the three heavyweights of the EU – Great Britain, France and Germany. A “constellation of stars” thanks to which we would see the wonders of the EU, especially “social Europe”. We’ve seen… And one can also recall the capitulation of Greek Alexis Tsipras (antiphrasingly labeled “the radical left”) after just six months at the helm of the government – and with good reason: he had declared his will, in the Union (and in the Eurozone) to stay, whatever the cost…

However, Le Pen promised to put French law above European law. Should she be elected and stick to this principle, it would hasten the end of European integration. The EU has a raison d’être for its inventors and sponsors only if it is able to impose on this or that country to maintain a course that suits the interests of the oligarchy, or to forbid this or that country from choosing a political course , which breaks with the interests of the oligarchy, even if the people have decided so.

This is why the Polish Constitutional Court’s decision upholding the supremacy of national law had sparked such anger in Brussels – the case is still ongoing. Its Karlsruhe counterpart had itself caused an outcry when it reaffirmed its superiority over the European Court of Justice (with regard to currency rules). The Romanians had also taken a step in this direction, albeit more discreetly. These are all blows that shake the EU’s very foundations.

If a country like France made such a decision at the highest level, there was every indication that the Union would not survive, possibly in the short term. Then France’s continued existence in the Union would not be at stake, but the existence of the EU itself, which would be even better from the point of view of the interests of each individual people, because it would pave the way for cooperation between free and sovereign countries. And that both within the old continent and worldwide.

Does Le Pen really intend to do this? Basically, it’s not about what she thinks or what she wants, but about what she represents – if anything, against her own knowledge. The political caste and mainstream press in many EU countries, notably Germany, accuse her of wanting to blow up the union and confirm the notion that she would if she were elected. And that’s the point: your choice would most likely trigger such an earthquake even before the first measure is decided that would set in motion a dynamic of decay. As the saying goes, the consequences of an illusion are never illusory…

Whatever the outcome on April 24, the future (and disintegration) of the European Union will remain a key issue.