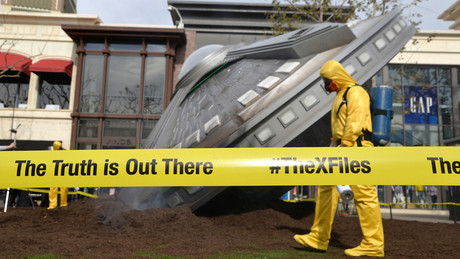 “The truth is out there,” Fox Mulder of the X-Files series would probably reply to the warnings that Oxford University scientists are now issuing to NASA. The signal transmissions planned by the space agency into space could result in an alien invasion.

Scientists at Britain’s Oxford University have warned of NASA’s plans to send location data and other information into space. These efforts could have dangerous unintended consequences — including triggering an alien invasion.

It’s about the proposed “Beacon in the Galaxy” (BITG) project, a data transmission by a NASA-led research team with the aim of welcoming extraterrestrial intelligence. The US space agency wants to broadcast the signal both via the Allen telescope facility of the SETI Institute in California and via the Chinese radio telescope “FAST”. The signal would include information such as the biochemical makeup of life on Earth, the time-stamped position of the solar system in the Milky Way, digitized images of humans and a prompt for extraterrestrials to respond to the transmission.

The planned signal transmission would not be the first of its kind. Weaker signals such as the Arecibo message from 1974 have already been sent into space in the past. Russian scientists also conducted a series of so-called “Cosmic Calls” in 1999 and 2003, from which the scientists hoped to communicate with extraterrestrial life forms. To date, however, there has been no verifiable answer. Only the radio signal known as the “Wow! Signal” made the community researching extraterrestrial life sit up and take notice.

That Wow! signal was a narrowband radio signal discovered on August 15, 1977 by astrophysicist Jerry R. Ehman as part of a SETI project. During his shift, Ohio State University’s Big Ear radio telescope picked up a signal originating near the constellation Sagittarius. At the time, Ehman only wrote one word on his notes: Wow! Under this name, the recorded transmission later gained worldwide fame.

To date, the signal is considered the most promising contender for an extraterrestrial message. Radio waves from unknown sources are received from time to time, but not with this brevity and intensity. However, the thesis that the signal may have been a contact made by an intelligent extraterrestrial life form is highly disputed, since the transmission was not repeated. Today the SETI researchers suspect that the signal was caused by comets.

However, according to the scientists of the BITG group, there is no reason to worry about their work. They posit that an extraterrestrial species advanced enough to be able to communicate across the cosmos “is very likely to have achieved a high level of cooperation among themselves and therefore knows the importance of peace and cooperation.” A theory that the Canadian futurist George Dvorsky then rejected as an “outdated idea”. He himself could imagine a “variety of scenarios” in which aliens with malicious tendencies continue to exist.