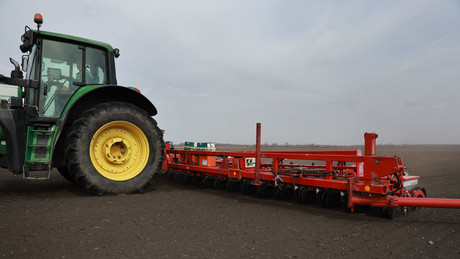 The Russian government announced an increase in export quotas for Russian fertilizers on Monday. This is intended to support manufacturers in the face of stagnating domestic demand and the effects of western sanctions.

Russia has increased export quotas for compound fertilizers to support domestic producers. This emerges from a decision published on the website of the Cabinet of Ministers on Sunday.

“The current export quotas for Russian manufacturers of mineral fertilizers have been temporarily increased by almost 700 thousand tons,” the decision reads. The measure is valid until May 31, 2022.

“These measures are necessary to support fertilizer producers who face the risk of idle time due to low demand in the domestic market and sanctions from unfriendly states,”

it says in the message. This refers to the sanctions that some Western countries have imposed on Russia in response to Moscow’s military operation in Ukraine. However, fertilizers have so far been largely spared from the restrictions. The US even removed fertilizers from its sanctions list earlier this month to protect US farmers from shortages and stem soaring food prices.

The Russian authorities assume that countries that have not joined the anti-Russia sanctions will take advantage of the export facilitation and buy more Russian fertilizers.

According to the document, the export quota is set at about 5.7 million tons for nitrogen fertilizers and about 5.6 million tons for compound fertilizers.
The quotas do not include fertilizer exports to the Donbass region and to Russia’s neighboring countries of Abkhazia and South Ossetia.

Earlier this month, Russian President Vladimir Putin stated that western countries would continue to buy Russian fertilizers due to the scarcity of this raw material.

“They will buy the goods that are scarce. They will. No one wants to starve,”