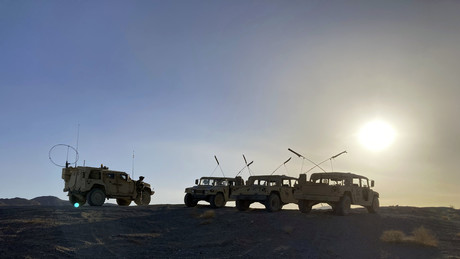 During a military exercise, the US Army draws on experience from the Ukraine conflict. The Associated Press reports that the aim is to prepare for a war against a “major enemy” such as Russia or China.

The US military is practicing war in circumstances heavily influenced by the Russian campaign in Ukraine. The aim is to “prepare the soldiers for future battles against a larger enemy such as Russia or China,” the Associated Press news agency reported on Saturday.

Some 4,500 Soldiers from the 2nd Brigade, 1st Cavalry Division face off at Fort Irwin, California, with fictional “Devonian” forces controlling the imaginary city of Ujen, using missiles and launching a “barrage of false accusations” against the US over social issues spread media. The exercise opponent is obviously supposed to represent the Russian army and also speaks Russian.

Participants in the exercise were instructed to have phones ready for quick social media posting. “I think the whole army is closely watching what’s happening in Ukraine and trying to learn lessons from it,” Army Secretary Christine Wormuth told the Associated Press. “The Russian-Ukrainian experience is a powerful illustration for our army of how important the information sphere can be,” she added.

During the conflict, both Moscow and Kyiv accused each other of spreading disinformation. Meanwhile, US intelligence officials themselves have admitted to making unverifiable claims and publicly disseminating information the reliability of which is “not rock solid” as part of an information war against Russia. This emerges from a report by the US news channel NBC News on April 6th.