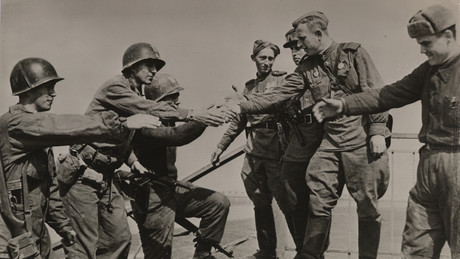 A left-wing alliance plans to mark the historic day with a demonstration in the northern Saxon city of Torgau, despite the cancellation of the official Elbe Day celebrations by the city administration. In April 1945, US and Soviet troops met in Torgau.

The city administration of Torgau in northern Saxony has decided to cancel the official celebrations of the 77th anniversary of the so-called Elbe Day on April 25th, when US and Soviet troops met. The town hall justified this step with the Ukraine war. In a statement, city officials said:

“The current situation and daily events make it advisable not to hold such a meeting this year.”

So far, official representatives of both sides have attended the official celebrations. At the same time, the administration emphasized that individual wreaths could be laid at the monument.

The Bishops’ Convention of the Evangelical Church in Central Germany also invites you to pray for peace at the former Elbe bridge, which was destroyed in World War II.

But a left-wing alliance still wants to celebrate the historic day with a public campaign. The German Communist Party, the newspaper Junge Welt, the East German Board of Trustees of Associations, the Society for Legal and Humanitarian Support and other organizations are calling for a demonstration at 12 noon on Saturday, April 23rd. The demonstration train is to start at the bridgehead on the east bank of the Elbe and lead over the new Elbe bridge to the Torgau market. The demonstration will end at the Monument of Encounter.

In a flyer for the demonstration, the callers draw attention to the words of US soldier Joe Polowsky about his encounter with the Red Army soldiers:

“We promised one another that the nations of the earth should and must live in peace.”

This oath is an urgent admonition. Despite the immeasurable suffering in World War II, triggered by Hitler’s Germany attacking the Soviet Union and Japan’s attack on China, war broke out again. The callers refer to the historical and geopolitical circumstances of the current conflict in Ukraine:

“The Russian Federation acted on the basis of historical experience and did not allow a second June 21, 41 (the day of the attack on the Soviet Union) to occur and attacked the military offensive installations aimed at the republics of Donbass and them in NATO-armed Ukraine and neutralized.”

In addition, the callers complain that the NATO countries have never seriously responded to the proposals made by Russia for a system of collective security.

“The result is the current state of war in Ukraine.”

“We say: Lay down your arms! Negotiations on collective security for all now! Peace and free decision of the republics of Donbass about their future!”

Everyone in Germany is obliged to “resist the war policy of the federal government and the NATO provocations”.

The central slogans of the planned demonstration are: “Get out of NATO” and “Peace with Russia and China”.

More on the subject – Cologne Easter March: Peace with Russia – no arms deliveries to Ukraine