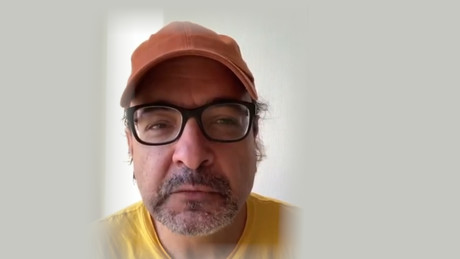 Amidst the bombardment of information and horror that war is, there is always a single piece of information that is particularly affecting. It’s often simple factors that make the difference. If we know a face to a name, for example. Or if there are qualities that connect; in this case it would be the job. So I would like to say in advance that, despite all the concerns that the lists of people who have disappeared in Ukraine cause me anyway, the case of Gonzalo Lira is particularly close to my heart. Emotion is not fair.

Gonzalo Lira – and now I have another problem. Because it would be correct to write “reported” because he’s not reporting at the moment anyway, but the imperfect with its closure feels like the story is already over. And there is at least hope that it is not.

Gonzalo Lira is a writer and film director by profession; he has published several novels in Chile. He is a Chilean and US citizen, but lived in Ukraine before the start of the Russian military operation. He has a wife and children in Kharkov.

In early March, he began reporting from Ukraine via video and live stream discussions. Not just on YouTube, but also on Twitter. Not so long ago he led a longer one conversation with Scott Ritter on military developments.

From time to time he also reported on the circumstances under which he found himself in Kharkov. That he would not be able to leave Ukraine because he could be arrested at any checkpoint. And that he was hiding in Kharkov and had already changed his whereabouts several times. He recounted the first time a neighbor warned him, just as he was smoking outside, about to return to his apartment, with a gesture pointing upwards and the word “Banderista.”

A while ago, his Twitter account was banned, but he managed to get it unblocked. The reason for this was that Twitter had a safety feature for him; At the end of March he formulated this clearly and unequivocally.

“You want to know the truth about the Zelensky regime? Google these names… If you haven’t heard from me for 12 hours or more, add my name to the list.”

Last Sunday he was due to appear on George Galloway’s Internet talk show MOATS (Mother of All Talk Shows). This is the message the host gave instead of his appearance:

Since then, the news of his disappearance has spread like wildfire through the blogger scene, especially the English-speaking one. And everyone is very worried. After all, outside of the Western mainstream bubble, everyone knows how dangerous this supposedly democratic Ukraine is not only for the opposition in the country, but even for those who report honestly about it.

The first person on the list to quote Lira in a tweet was Volodymyr Strok, the mayor of Kreminna. His crime was calling on his colleagues to negotiate with the Donbass military. He was taken away, tortured and shot, and Anton Gerashenko, adviser to the Interior Ministry, celebrated this murder with the comment “one less traitor in Ukraine”. This and other cases, such as that of Ukrainian negotiator Denis Kireev, who was murdered after returning from negotiations in Minsk, have just been covered by The Grayzone in a lengthy one article in together. And that too is part of the alternative news spectrum, like Junge Welt, which is about attacks on the opposition reported. It has been like this since 2014. Back then, immediately after the coup, there were reports that Ukrainians were being forced on the streets of Kyiv to say “Heil der Ukraine, Heil den Helden” – something that reminds everyone of the Germany of the March 1933 must remember. As evidenced by the cases named by Lira, among many other things, these parallels continue to this day.

So let’s spell it out what the concern for Gonzalo Lira is. That he was captured either by the SBU, the Ukrainian secret service, or by one of the Nazi troops, which would have most likely been followed by torture and death. And I realize how difficult it is to write that about someone whose face you know.

A lively discussion ensued on the various blogs that have since reported his disappearance, for example here. And some are hoping he’s just dug so deep that he can’t even tweet, and maybe we’ll hear from him again in a few days. But there are also reports that give reason to fear that this hope is in vain. Like this one by Vanessa Beely.

More reports on the subject were found on the now-deleted Twitter channel of the Ukrainian Nazi, known by the nickname “Boatsman.” They are obtained via screenshots.

“The irony that Gonzalo Lira, a Chilean, was caught by a guy nicknamed ‘Chilene’ is huge. Let’s hope the beheading shows up on Telegram soon.”

Yesterday, there was a surprising report on Gonzalo Lira’s disappearance on CNN Chile. It has now been deleted and finds can only be found in the archive of the Internet. At least he reported that the Chilean Foreign Ministry in Kharkov asked about his whereabouts. Also a rival candidate of the new Chilean President Boric, Eduardo Artés, expressed in the press there: “The administrator of Moneda [Sitz des chilenischen Präsidenten] Gabriel Boric should do his duty, which is to ask his friends in NATO and the EU that he turns up alive.” Other Chilean media deal with takes a closer look at the list prepared by Lira to illustrate the feared fate of her compatriot. In Chile, people still remember what it means when someone “disappears.”

The second country whose citizenship Lira also has, the United States, has not yet campaigned for him. Lira probably didn’t expect that either; he himself has asked to contact the Chilean embassy in Poland should anything happen to him. Also in the US mainstream media there is only one so far article March 21’s The Daily Beast, which called the blogger a “pro-Putin ripper,” and which Lira, upon publication, classified as a call to murder, which was no exaggeration. And while in earlier decades a US embassy would have at least acted as if it were standing up for its citizens, even to political opponents, this too seems to have been disposed of with all other diplomatic customs.

On the contrary, there is an American journalist in Kharkov who couldn’t spread her jubilation about Lira’s disappearance quickly enough (this tweet has since been deleted, too, like Boatswain’s account, as if someone wanted to cover their tracks). Max Blumenthal reported that this same woman works in Nevada for the Democratic Party and has worked there as an agent provocateur. She wrote: “He is a (supposedly) Russian saboteur posing as a ‘journalist’ to destroy Ukraine. Congratulations to the Ukrainian security services.”

This tweet should show what Gonzalo Lira can actually expect from the democratic government of the United States.

As quickly as the news of his disappearance spread, it should spread just as quickly, should there still be any sign of life from him. But every day the hope is dwindling. Then Gonzalo Lira would be just another name on a long, sad list of victims of the Ukrainian madness. Another reminder that this madness must end.

More on the subject – The truth about Ukraine and the question: what do we owe her anyway?