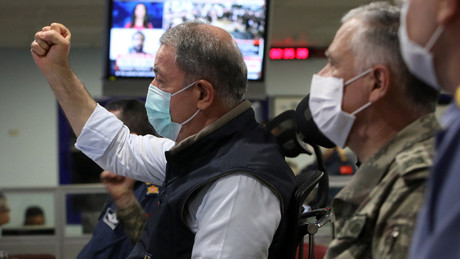 The Turkish military has again taken action against Kurdish positions of the PKK in northern Iraq, which Ankara has classified as a terrorist organization. Baghdad has strongly condemned the Turkish military operation on Iraqi territory. Turkey threatens to step up military intervention in the “coming days”.

Turkey’s military intervention in Iraq is a violation of Iraq’s sovereignty and goes against the concept of good neighborliness, the Iraqi Foreign Ministry said in a statement on Monday. On Sunday evening, the Turkish army launched an extensive military operation against fighters from the Kurdish PKK in Iraq, which Ankara classified as a terrorist organization.

Iraq has not served and will not serve as a base for attacks on neighboring countries [auch in Syrien gibt es eine große kurdische Enklave] to serve. Iraq should not become “a scene for conflicts and settlements for other external parties,” the statement said. According to the Turkish military, the Turkish operation “Claw-Lock” is aimed at Kurdish militias in the northern Iraqi regions of Metina, Zap and Avaşin-Basyan. Ankara sees these groups as allies of the Kurdistan Workers’ Party (PKK).

Iraq is an independent, sovereign country and any invasion or attempt to destabilize the country is unacceptable to Iraq, said Iraqi Shia leader Muqtada al-Sadr, adding that invading neighboring countries that have maintained friendly relations talk to Iraq was also unacceptable.

The Turkish military operation in northern Iraq, launched on Sunday, has achieved all of its initial objectives, the Defense Ministry in Ankara said in a statement Monday. The Turkish military stated that large numbers of “terrorists” had been killed and many facilities linked to them had been destroyed. Turkish commandos and artillery are said to have been involved in the operation as well. In addition, several air raids by manned and unmanned aircraft are said to have been carried out.

A PKK spokesman in Iraq told AFP there had been “intense fighting” between the Turkish army and the PKK’s military wing. The Turkish armed forces had tried “to drop off soldiers with helicopters and also to advance on the ground”. According to the Turkish authorities, the operation is to be increased in the “coming days”.

The start of the Turkish offensive came a few days after the visit of the head of government of the autonomous Kurdish region in Iraq, Masrur Barzani, to Turkey. It is believed that Barzani was informed about the Turkish army’s deployment. After his meeting with Turkish head of state Recep Tayyip Erdoğan, Barzani spoke positively about the “expansion of cooperation” with Turkey “to promote security and stability” in northern Iraq.

The PKK has been classified as a terrorist organization by Turkey, the US, the UK and the EU. At the same time, however, the Kurds were an important ally of the West, including the USA, in the fight against the terrorists of the Islamic State (IS, formerly ISIS) in both Syria and Iraq.