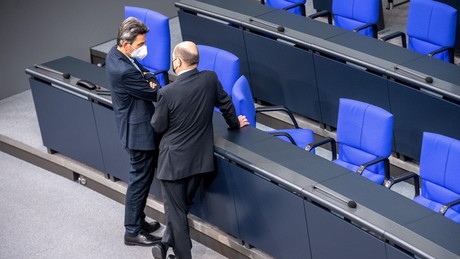 Berlin politics oscillates between mediocrity and incompetence, megalomania and loss of reality – and this is not the first time in a good hundred years. Despite all the necessary criticism, Chancellor Scholz does not seem to have completely lost sight of the realities, even if he follows Washington and the NATO line overall in foreign policy.

For years there has been the impression in Berlin that government action is not determined by careful deliberation after free public discussion. Since the actions of the Federal Chancellor, Mrs. Dr. Angela Merkel, in connection with the defenselessness of German state borders since the late summer of 2015, German politics has been determined by decisions that resemble a raid and a coup at the state level rather than the proud, democratic tradition of the Federal Republic of Germany at the time of German reunification.

The latest example of this inglorious chain of decisions are Chancellor Scholz’s weekend announcements that he would invest 100 billion euros in German rearmament and, on another weekend, essentially make 2 billion euros available to Ukraine for arms purchases. Discussions about the reasons for these decisions do not take place. There is only an outbidding competition between certain political camps. One can feel sorry for the Chancellor because, despite all the necessary criticism of his above-mentioned decisions, he seems to be the last German bulwark against direct German participation in the Ukraine war.

The international news channels, preferably former high-ranking NATO officers, point out that it makes no difference in war participation whether combat aircraft or battle tanks are made available to the Ukrainian war party. The predicament and the pressure that lay on the almost slender shoulders of the German Chancellor could be seen during his visit to Washington, when the American President decreed how German government action should look like.

Actually, there should be an outcry from a democratically constituted German public when considerations of this kind are pending and decisions are made in a community that is remote from the law. However, one has to consider the way in which we in the member states of NATO and also in the G7 have been practically brought into line. Simply asking for answers to legitimate questions is sacrilege. Things were different even during NATO’s war of aggression against Yugoslavia, the Afghan war, the attack on Iraq or the start of the Syrian civil war. Not all member states took part, for reasons of the obvious violation of international law by the American and British actions. Gerhard Schröder is definitely an example of this. The necessary domestic and foreign policy debates developed accordingly, as Rumsfeld had to experience at a security conference in Munich.

Now the motto is: “March in step!” Everyone follows because their personal destiny seems to depend on this loyalty. The inevitable consequence is and will be that “Nuremberg State Law” applies to Germany with immediate effect. “Caught along” is just “hang along”. To ensure that no one from Germany can be available to talk to the conflicting parties about peace, one should take a look at the actions of interested circles against former Chancellor Gerhard Schröder.

This makes the situation for Chancellor Scholz even more complicated and one should not be surprised when, on a beautiful spring morning, the Chancellor’s unconditional surrender to Dr. Strack-Zimmermann from Düsseldorf is announced from the Chancellery. However, that should not hide the fact that between the official German participation in the war and the current situation, the chairman of the SPD parliamentary group, Dr. Rolf Mützenich from Cologne, acts. Scholz as a bulwark does not stand alone. It should be clear to the German people now and later that Dr. It is Mützenich who, according to the current state of affairs, seems to have prevented Germany’s third war against Russia in almost 110 years. According to the laws in NATO, this should be seen as an unfortunate circumstance, especially since the mood in the German capital has long been reminiscent of the “1914 War Credits”.

Just now, at Easter, church officials were being heard about the war in Ukraine in the same way that is true for those who are in the middle of purgatory. Like others, you talked about “values”. That is often enough the hook of leading representatives of official Europe, be it Dr. von der Leyen or Mr. Borrell. They have no peace initiatives. Instead, they rant about making decisions on the battlefield. In Moscow, and not only there, there must be the impression that little or nothing has changed since 1945, especially in the country that owes its reunification to the Soviet Union. The official declarations that are dripping with hate make you sick to the stomach.

More on the subject – Baerbock visits Baltic states: “Every square centimeter of the alliance area” is defended