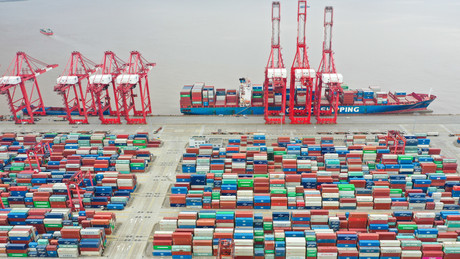 Due to the “zero-COVID” strategy, the Chinese metropolitan area of ​​Shanghai has been in lockdown since the end of March. With Shanghai playing a prominent role in world trade due to the world’s largest container port, experts expect drastic effects on global supply chains.

As the Chinese government continues to adhere to the “zero-COVID” strategy, the Shanghai metropolitan area has been in lockdown since the end of March. As a result of the restrictive corona policy as a procedure for several suspected corona cases, numerous factories have also been closed and the loading and unloading of ships in the port of Shanghai, the largest container port in the world, is severely restricted.

Now there is growing concern among experts that the restrictions imposed by the authorities will severely disrupt international supply chains and stall the global economic upswing again after two years of the corona pandemic. A lockdown in the Shanghai metropolitan area, especially if prolonged, could have serious repercussions for the rest of the world given its crucial role in global trade. Shanghai and the surrounding regions are among the largest manufacturing centers in China.

The first effects are already visible: Tesla had to close its giga factory in Shanghai on March 28 and only resumed production at its Shanghai plant three weeks later. Its Chinese competitor Nio suspended production on April 8, citing an increase in corona cases in Shanghai and other provinces where the company operates plants.

Bruce Pang, head of macro and strategy research at China Renaissance Securities in Hong Kong, told Al Jazeera news agency that the Shanghai Containerized Freight Index, which is already falling due to the war in Ukraine, continues to fall, suggesting a drop in exports indicate in Shanghai.

Julian Evans-Pritchard, senior China economist at Capital Economics, a London-based consultancy, told Al Jazeera that the impact has been limited so far, however, as many firms continue to operate under the so-called closed-loop system, in which workers are employed who remained at their workplace during the closure work:

“Many are already living in dormitories provided by employers in normal times.”

In addition, the Chinese dealers could compensate for the consequences for a short time by stockpiling. However, if the lockdown is prolonged, it could lead to product shortages both inside and outside of China. There are already signs of this, too: According to a report by Hong Kong-based experts from Spanish financial services group BBVA on April 7, vehicle cargo traffic in the port of Shanghai has fallen sharply during the lockdown, while the number of ships waiting outside the port , increases.

Dotting the sea off Chinese ports are 477 bulk cargo ships waiting to deliver resources from metal ore to grain into the country.Queues of vessels carrying raw materials have jumped after Shanghai initiated a city-wide lockdown at the end of last month to combat Covid- 19 pic.twitter.com/mu4k5e4IzJ

China could mitigate the impact somewhat by using other ports, as seven of the world’s ten largest container ports, including Shanghai, Ningbo-Zhoushan, Shenzhen, Guangzhou, Qingdao, Hong Kong and Tianjin, are in China. Still, the port in Shanghai is bearing the heaviest burden, as in 2021 alone, 20 percent of China’s cargo traffic was handled there. So it will be difficult to fill the gap if the port of Shanghai falters. The consequences for global supply chains would be clearly felt.

Emerging Asian economies like Vietnam and Cambodia could be hardest hit because they depend on Chinese inputs for production, Capital Economics warned in recent reports. Chinese components contribute 24 percent to the gross value added of Vietnam’s manufacturing sector.

But other countries are also likely to be affected: Goods imported directly or indirectly from China account for more than 20 percent of Japan’s total imports, and more than 15 percent of US purchases from abroad. Exports to the EU are also at a similar level. Germany should therefore also be affected: as early as the end of March explained Gunther Bonz, President of the Port of Hamburg Business Association, told NDR that he assumes that fewer ships will arrive in the Port of Hamburg in about six to eight weeks.

Meanwhile, questions are again being asked about the economic logic of the country’s “zero-COVID” strategy. As part of a zero-tolerance policy, China locks down entire cities as new cases emerge, even though the vast majority of the world is now backing away from strict measures and learning to live with the virus. But there are now also signs that the authorities are increasingly concerned about the economic and social consequences of the draconian lockdowns.

On April 11, authorities in Shanghai announced slight easing of measures to allow residents of areas where the coronavirus situation is under control to have more freedom of movement. For example, residents of areas where no cases have been reported for 14 days are now allowed to leave their homes provided they follow hygiene measures and remain in their subdistrict. In areas where there has been no case for seven days, residents are allowed to pick up food deliveries or go for a walk at a certain time and place.