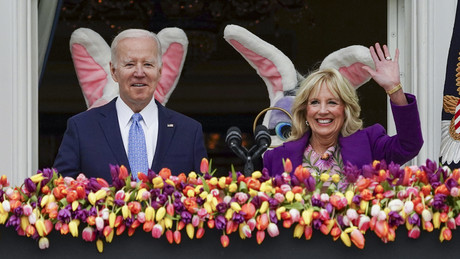 At the annual “Easter Egg Roll” at the White House in Washington, DC, there were several bizarre incidents with US President Joe Biden on Monday. An “Easter bunny” prevented the apparently confused president from speaking to reporters or visitors on several occasions.

Apparently, the Secret Service has assigned an employee to protect US President Joe Biden from unpleasant conversations and encounters: an “Easter Bunny”. At least that’s what several videos shared on the Internet, taken at an event in the White House on Monday, suggest.

The clips show how a costumed employee intervenes at least twice to distract the US President from potentially sensitive situations. The first video shows Biden speaking to a group of reporters who appear to be asking him questions about Pakistan and Afghanistan. However, as the President is about to reply, a giant rabbit in a purple costume appears and interrupts him mid-sentence. The costumed staffer stands between Biden and the reporters and waves both hands in front of the President’s face, at which point the US President turns and walks away from the group.

A second video shows the same rabbit intervening again to stop Biden from speaking to a group of parents. As in the first case, the rabbit intervenes and asks the US President to leave.

The interventions came at the so-called “Easter Egg Roll,” an annual Easter event that traditionally draws thousands of children and parents to the White House grounds. After the event was canceled in the past two years due to the COVID-19 pandemic, it took place again for the first time on Monday.

Biden, who at 79 is the oldest US president in US history, has made a series of notable missteps since taking office last year. As a result, critics – such as the former doctor in the White House Dr. Ronny Jackson – Repeatedly subjecting Biden to cognitive tests to diagnose whether the US President is even fit to continue in office.

In the past, Biden himself had repeatedly pointed out to the public that officials in the White House were trying to choreograph the president’s performances. For example, he himself referred to a list of which reporters to call at last month’s G7 meeting in Brussels.

When First Lady Jill Biden wanted to read a book to a group of children at the “Easter Egg Roll” on Monday, the US President intervened briskly: “You don’t even let me read.” Other videos from Monday’s event showed the First Lady urging him to wave to the crowd. Biden had simply sat motionless after the end of his speech.

Breitbart reporter Charlie Spiering noted that a Twitter post by White House Press Secretary Angela Perez on Monday suggested that she might have been the rabbit-suited staffer. Perez tweeted a picture of someone in the same costume and wrote in the caption, “Hopping on a Zoom call.”