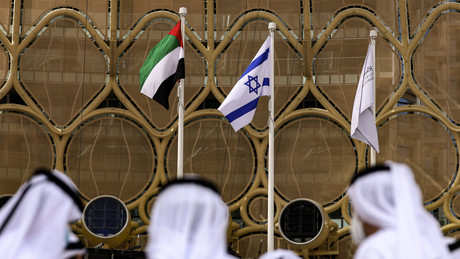 The United Arab Emirates has joined Arab and Muslim criticism of the Israeli police’s crackdown on Palestinians on the Temple Mount. They also canceled their participation in the Israeli Independence Day celebrations and summoned the Israeli ambassador.

The situation in Jerusalem’s old town has been particularly tense in recent days. Heavy riots broke out on the Temple Mount in Jerusalem last week on the second Friday of the fasting month of Ramadan after morning prayers. During violent clashes between Palestinian demonstrators and Israeli security forces, the Israeli police cracked down on the Palestinians. More than 150 people were reportedly injured.

Amid renewed tensions between Israelis and Palestinians, Emirati airlines Wizz Air Abu Dhabi and Etihad Airways canceled their participation in this year’s Israeli Independence Day air show, according to the Israel Pilots’ Association. The Emirates’ participation in the air show was intended to demonstrate the increased cooperation between the two countries. Both countries normalized relations in 2020 under the US-brokered Abraham Accords.

The announcement was made shortly after the announcement of the call-in of the Israeli Ambassador to the Foreign Ministry of the United Arab Emirates in Abu Dhabi. At the same time, the Jordanian foreign minister summoned the Israeli ambassador to protest the recent incidents at the al-Aqsa mosque in Jerusalem.

The Emirates’ two airlines scheduled to take part in the traditional Independence Day flyover said they had not had enough time to prepare. However, Israeli officials confirmed that the real reason was the Israeli police action on the Temple Mount against Palestinians over the weekend.

Israel’s first ambassador to the Emirates, Amir Hayek, assumed his diplomatic mission in October last year. He was summoned for the first time this week in Abu Dhabi. The Emirati Minister of State for International Cooperation, Reem Ebrahim Al-Hashimi, told Hayek on Tuesday that Palestinian worshipers on the Temple Mount — known to Muslims as al-Haram al-Sharif — must be given full protection.

Al-Hashimi stressed the importance of respecting Jordan’s historical role in protecting the Temple Mount. She spoke of the need to resume a peace process for the “establishment of an independent Palestinian state on the 1967 borders, with East Jerusalem as its capital, in accordance with legitimate international resolutions and the Arab Peace Initiative.”

East Jerusalem has been a contentious issue between Palestinians and Israelis since Israel captured the area in the Six Day War in 1967. While Palestinians claim the district as the capital of a future separate state, Israel annexed the area shortly after the conquest in an internationally unrecognized move.