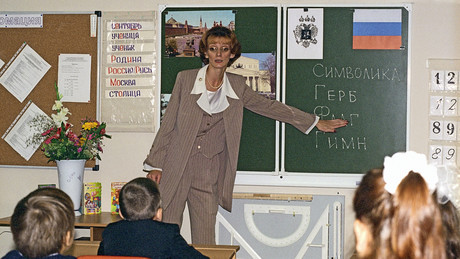 The Russian Ministry of Education has announced innovations in the school system. From the start of the next school year in September, every school week should begin with the national anthem and the hoisting of the flag. Some of the lesson content on history should be taught from the 1st grade.

In Russian schools there will be a weekly ceremonial from the next school year starting in September. Education Minister Sergei Kravtsov has recommended that school administrators begin the school week by raising the Russian flag and anthem every Monday. The solemn ceremony will become the rule in individual schools from May, said the minister. From the next school year, it will then be compulsory for all schools in Russia.

Krawzow also explained that some of the history content is now being taught in class from the 1st grade. Although there will still be no separate lessons for such a subject in primary school, certain historical content could be taught within the framework of other subjects, even before the 5th grade, where history classes normally begin in Russia. Facts about the personal history of families and about the respective region as well as visits to museums and exhibitions could be considered.

“Learning history was and is an important part of the education and upbringing process. We will do everything to ensure that the historical memory is preserved.”

The Minister of Education of Russia also announced that his department would have the history books supplemented with information about Russia’s so-called special military operation in Ukraine.

Kremlin spokesman Dmitry Peskov welcomed the decision of the Ministry of Education at his press conference on Tuesday. This ministry has absolute authority to make such decisions.

In his opinion, the focus should be on local history. However, this would have to be decided by experts.

In October 2021, Russian President Vladimir Putin commissioned the government to enable the use of Russian state symbols in schools. On April 13, Prime Minister Mikhail Mishustin signed a decree amending the state program for the development of education in Russia. The document provides for equipping schools with the symbols of the state at the expense of the National Fund “Education”.