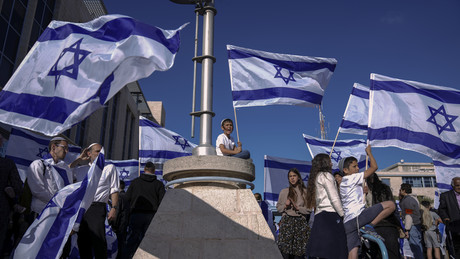 Israeli nationalists waved flags on Wednesday as they prepared to march to Damascus Gate, a gathering place for Palestinians and a gateway to the Old City. In doing so, they flouted a police ban on the event, which was one of the triggers for the war between Israel and Gaza last year. Noam Nisan, one of the organizers of the planned march, told Kan public broadcaster that the march will go ahead as planned on Wednesday, although there is no permit.

Israel Police said dozens of officers were deployed in Jerusalem’s historic Old City, which is home to religious sites owned by Jews, Christians and Muslims. Law enforcement officials feared that clashes during the Jewish Passover and Muslim holy month of Ramadan could fuel the already tense situation in the city, particularly around the compound of the Al-Aqsa Mosque, known to Jews as the Temple Mount is.

The hate speech on the so-called flag march is so abominable, inhuman, Islam-hating and racist that I can’t find the words. This – in internationally recognized occupied Palestinian territory in East Jerusalem – is truly appalling. #Israel #Palestine pic.twitter.com/d62GIcBGE4

The hilltop sanctuary in Jerusalem’s Old City is Islam’s third most important, while for Jews it is the holiest site where two temples stood in ancient times. This area is the emotional zero point of the Israeli-Palestinian conflict and a flashpoint of previous outbreaks of violence.

According to Hamas, which governs the Gaza Strip, if it allows the march to “approach our holy places,” Israel will bear “full responsibility for the consequences,” without being specific. Several nationalist Israeli politicians said they would take part in the march, including ultra-nationalist MP Itamar Ben Gvir, a student of the late Rabbi Meir Kahane and a frequent provocateur in the sensitive Palestinian neighborhoods of east Jerusalem. Israeli Prime Minister Naftali Bennett said he would ban Ben Gvir from attending the rally.

A similar situation last May escalated after Israeli nationalists provoked Palestinians around the mosque with their flag march in the Old City, according to Palestinians. The events sparked an 11-day war between Israel and Hamas, the aftermath of which continues to this day.
Israeli-Palestinian tensions have escalated in recent weeks following deadly attacks and military operations in the West Bank. On Monday, Palestinians fired a rocket from the Gaza Strip at southern Israel for the first time in months, prompting Israel to respond with airstrikes. Days of clashes ensued between Israeli police and Palestinians at the holy site in Jerusalem.

This woman is the widow, Ghada Sabateen, 47 years old, who supports 6 children and has no vision in one of her eyes!! What hatred resides in the hearts of these criminals? #terrorism #palestine #FreeAhmadManasra pic.twitter.com/O9QWjJ49rZ

In particular, the case of an unarmed mother caused great dismay and outrage. Ghada Sabateen, a teacher, widow and mother of six, succumbed to her injuries after Israeli forces shot her multiple times near a West Bank checkpoint near the city of Bethlehem, ultimately killing her.

According to the Israeli army, the 47-year-old approached in a suspicious manner despite warning shots in the air and requests to stay behind. The soldiers therefore shot her in the lower body. According to the information, the woman received first aid and was taken to a hospital. According to the Palestinian Ministry of Health, she succumbed to her injuries there. Sabateen was mostly blind, according to her now orphaned children, and amateur footage shows her raising her hands during the incident with Israeli army personnel. She could therefore have run towards the soldiers because she was confused and panicked after the warning shots. Israeli media also confirmed that the Palestinian woman was not armed. The media quote their children as saying that the teacher was “full of love and kindness” and always tried to stay out of conflict. In an extraordinary move, a US diplomat, the head of the Palestinian affairs department, publicly commented on the incident reacted and welcomed the enlightenment announced by Israel.

According to the German media, young men had also been killed earlier in April, some of them minors who were probably referred to as children in other reports. A 14-year-old was killed near Bethlehem and a 20-year-old during a military operation in Silwad near Ramallah. A 17-year-old Palestinian man has also died of his injuries after being shelled by Israeli soldiers in Jenin.
The army reported that a Palestinian threw a fire bottle at soldiers in Husan. They then shot and hit him. There had been riots there involving hundreds of Palestinians.

In early April, a Palestinian from the West Bank shot dead three people in the Israeli coastal city of Tel Aviv. The Israeli army then arrested around 18 people whom they described as terrorist suspects. In Nablus in the West Bank, Palestinians are said to have thrown incendiary bottles and stones at Israeli soldiers during the so-called anti-terrorist operation at the Joseph’s Tomb. In response, the soldiers fired live ammunition, among other things. Reports about the dead young people repeatedly referred to a situation: someone had thrown a fire bottle from moving cars.
According to Palestinian sources, Israeli soldiers shot and killed a 21-year-old near Bethlehem. The Israeli military said he threw an incendiary bottle at passing cars and soldiers shot him. The Palestinian news agency WAFA reported that the man was at home and was shot in the back. The Ministry of Health in Ramallah confirmed his death.