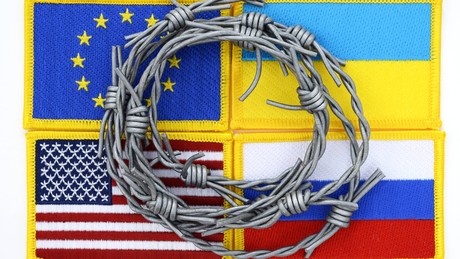 Instead of seeking a ceasefire, the US and its allies are doing everything they can to turn the Ukraine conflict into a proxy war against Russia.

A political analysis by Timur Fomenko

Last Thursday, the Russian Defense Ministry confirmed that the flagship of the Russian Black Sea Fleet, the Moskva, sank after a fire broke out on board for reasons unknown. Amid a deluge of Ukrainian propaganda, with Kyiv promptly claiming to have sunk the boat with a Neptune missile, there has been no independent or verified confirmation of what actually happened.

Almost at the same time confirmed the United States to allocate a new $800 million military “aid package” to Kyiv, including “heavy weapons,” after EU foreign policy chief Josep Borrell had recently announced a commitment the EU had confirmed to Kyiv that they would “win on the battlefield”. As Moscow prepares for a new offensive to secure the Donbass region, it should be clear to everyone by now that the Western powers are not trying to resolve this conflict or even seek a ceasefire, but want to escalate it and turn it into a full-fledged proxy war against Russia .

Aside from the invasions, the bombings, the staged government coups that the US has imposed on numerous countries around the world, one of the US’s favorite methods is to confront its opponents in proxy wars. That is, to let the war of a state that you support fight against your own rival without getting directly involved militarily.

Cold War history is riddled with examples of this. Supporting the mujahideen against the Soviets in Afghanistan, supporting Saddam Hussein against Iran in the Iran-Iraq war or, to take a more recent example, attempting – albeit unsuccessful – to aid Syrian President Bashar al-Assad to overthrow Islamist “rebels”. Proxy wars allow the US to minimize its own casualties by letting someone else die for its geostrategic goals, politically destabilizing rival states while maximizing financial gains for the military-industrial complex with a steady flow of arms shipments.

After the US spent the first month of the Russia-Ukraine conflict urging Russia to withdraw, it is now becoming increasingly clear that the US and its allies have changed course and are intent on prolonging the conflict in order to To inflict as much damage as possible on Moscow, in particular by stepping up arms supplies and providing training and reconnaissance to the Ukrainian army. Although it was, of course, Moscow that made the decision to start the conflict in the first place, it was always obvious that the US was absolutist about the situation.

Washington rejected any kind of compromise between Russia and Ukraine that might have helped avoid the current military hostilities, which subsequently boosted Vladimir Zelensky’s confidence in his opposition to negotiations with Russia. And now the well-known situation has started. Washington does not want the war to end in a hasty decision with Ukraine making concessions to Russia because the ideal outcome is to ensure Moscow suffers as much damage as possible. This, in turn, means that an open-ended war is actually in the US interest.

There are mutliple reasons for this. First, Russia’s tactical retreat from northern Ukraine and focus on the Donbass appears to have given the West confidence that it could succeed in undermining Russia’s core objectives of the military special operation. Second, the intensification of the conflict and military escalation gives the West the political space it needs to impose further sanctions on Moscow and allows the US to impose more “union” on its European allies.

Washington also priced that the broader context of this conflict will allow the US to focus more on a isolation of China and to force other states to take sides and expand military alliances. Just recently, it was reported that the US is seeking to bring Japan into the AUCUS-Involve alliance to the military containment to expand China. In her recent statements, US Treasury Secretary Janet Yellen urged Beijing to resist Russia’s offensive in Ukraine or risk “losing its reputation” in the world. In other words, the longer the US can drag this game out, the more geopolitical outcomes it can have in its favor.

However, this escalation scenario towards Russia threatens to transform the Ukraine crisis into a new “Great Patriotic War” – a conflict in which the very survival of the nation is at stake. Why? The United States and its allies have never made it secret that they want the conflict in Ukraine to end in failure for Russia. Some Western government officials openly wish nothing more than for military failure to bring about the downfall of President Vladimir Putin and the current Russian government – even if the only clear call for regime change in Russia comes as an alleged slip of the tongue by US President Joe Biden was reinterpreted. All of this confirms the Kremlin’s long-held suspicions about the West’s true intentions towards Russia and the goals behind NATO’s eastward expansion.

In summary, one can say that we are now entering very dangerous waters. The US and its allies could not have made it clearer that they never seek peace or compromise and that they want to escalate the situation in Ukraine in order to assert their geopolitical hegemony in the world, be it against Russia, India or China. For Russians, this is becoming an ever-increasing struggle against the Western drive to conquer, dominate and subjugate their country, with Ukraine as the pawn.