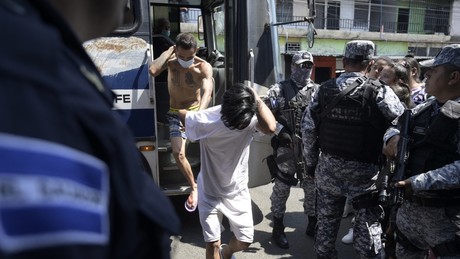 As part of the war on gangs declared by President Nayib Bukele, Salvadoran police have arrested more than 13,500 suspected gang members in 24 days. The head of state speaks of the safest Holy Week in the country’s history.

Since the beginning of the so-called war on gangs in El Salvador, police say they have arrested 13,573 suspected gang members in 24 days. On Twitter, the police described the gang members as “terrorists”. Alone on Monday have there were 487 arrests. On April 18, three people were killed across the country, up from 12 in 2019.

After a wave of murders with more than 80 victims in one weekend alone, the government of the Central American country declared a 30-day state of emergency on March 27. In addition, the penalties for crimes committed by gangs have been increased. In addition, on April 5, parliament passed a reform of the law that would make gang-spreading messages punishable by up to 15 years in prison. This applies to graffiti, for example, but also to the media reproduction of news or notifications that are believed to have come from criminal organizations.

President Nayib Bukele wrote on Twitter on Monday that this year’s Holy Week, April 10-17, was the safest in the country’s history. His government will continue the current security policy.

However, the tough approach taken by the Salvadorian government has been sharply criticized by many NGOs and international organizations. They call on the police to respect the rights of those arrested. Many suspects claim to be victims of arbitrary arrests.

El Salvador has one of the highest percentages of inmates in the world. The prisons are sometimes overcrowded. According to the government, around 70,000 people belong to gangs. A few years ago, the country with around six million inhabitants had the highest murder rate in the world. The number of murders per 100,000 inhabitants was 103 in 2015. According to official statistics, it was 18 last year.

More on the subject – President Bukele after wave of murders in El Salvador: 1,400 captured gang members are not released