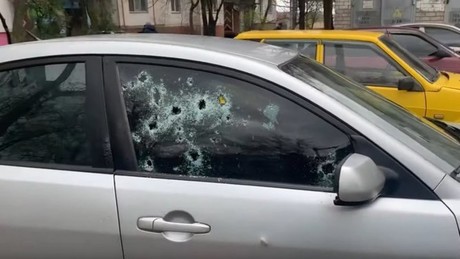 In the city of Cherson, which has been controlled by the Russian army since the beginning of March, the pro-Russian blogger and activist Valeriy Kuleshov was shot dead in his car on the morning of April 20. The investigation is only just beginning, but there is some evidence to support the hypothesis that it was the work of Ukrainian forces.

Pro-Russian blogger and volunteer Valery Kuleshov was shot dead in his car in the yard of his home in Kherson by unknown gunmen around 8:15 am local time on Wednesday morning.

The southern Ukrainian city of Cherson has been controlled by the Russian military since early March. Kuleshov openly sided with Russia and wrote a blog about life in Cherson and the organization of humanitarian aid.

On the youtube channel “Our Cherson”, which Kuleshov ran together with other bloggers, was his last video released. By the evening, hundreds of Ukrainians and Russians from all parts of the country had left their condolences in the comments.

According to the city administration, the police are investigating in all directions in cooperation with the Russian military police. However, the most likely hypothesis is that it is the work of a Ukrainian diversionary group or pro-Ukrainian terrorists operating underground.

“Advisor to Interior Minister Gerashchenko confirmed that the blogger was killed in Kherson by Ukrainian special services. But that’s okay, it’s a good democratic murder.”

The adviser to the Minister of the Ministry of Internal Affairs Gerashchenko confirmed that the blogger in Kherson was killed by the Ukrainian special services. But it’s okay, it’s a good democracy murder.

This is now the second murder of a pro-Russian socialite in the city that RT DE has had reported. At that time, administration was still largely left to the Ukrainian authorities. A lot has changed since then: so-called military-civilian administrations were set up in many towns and communities in the Cherson region. In addition, the lists of voluntary territorial defenses and right-wing extremist organizations in the city are being worked through intensively. Apparently, this is not enough to guarantee peace and security to the peaceful citizens of Kherson.

The Ukrainian side is taking revenge on everyone who cooperates with the Russian side. That’s what happened on March 2nd Vladimir Struk, the mayor of the city of Kremeinna in the Lugansk region shot dead on camera for willingness to cooperate with Russia. His crime was calling on his colleagues to negotiate with the Donbass military. He was taken away, tortured and shot, and Anton Gerashchenko, adviser to the Interior Ministry, celebrated this murder with the comment “one less traitor in Ukraine”.

In the second half of March the Ukrainian security service SBU kidnapped the daughter of the mayor of the city of Kupyansk in the Kharkov region occupied by the Russian army, Gennady Mazegor. He is also accused of “collaborating with the occupier”. The 20-year-old student was in western Ukraine when she was kidnapped. According to Mazegor in an emotional video address to Zelensky, he is threatened that his daughter should be killed.

To the extent that the names of the victims of what is known in the West as the “Bucha massacre” have been made known at all, they are people who can be assumed to have pro-Russian views. The openly pro-Russian politician was one of those killed Alexander Rshavsky. The former Rada deputy showed his pro-Russian views to the end. Why the Russian military should shoot him of all people is unclear.

The mayor of the village of Bucha, Olga Sucheko, had worked with the Russian troops at least on humanitarian issues until she disappeared at the end of March 2022. According to the villagers, she had refused to leave the place before the Russian military moved in because she wanted to continue her official duties in the interests of the villagers. The villagers also described vigorous activity by the mayor in resolving supply issues. It is in the nature of things that this was only possible in the period up to the withdrawal of the Russian military through cooperation with the latter.

From the March in Kyiv and other cities of Ukraine disappeared opposition politicians, journalists and celebritieswith a few exceptions, there is still no sign of life.