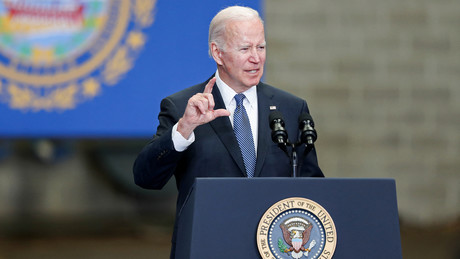 The US is currently experiencing the highest rise in inflation since 1981. US President Joe Biden still blames Russia for the country’s high prices. However, he now also says that the main reason for this is the COVID-19 pandemic with disruptions in the supply chains.

US President Joe Biden conceded on Tuesday that lockdowns imposed in the wake of the COVID-19 pandemic are the main cause of runaway inflation. At the same time, however, Biden continued to blame his Russian counterpart Vladimir Putin for the high gas prices in his own country. Biden’s domestic popularity has plummeted because of the worst inflation since 1981.

The White House has repeatedly tried over the past six weeks to blame the Russian military operation in Ukraine for the inflation, insisting on the phrase “Putin price hike” to describe the skyrocketing prices at the pumps . Biden dutifully repeated that argument in a speech in New Hampshire on Tuesday, but then downgraded Russia as the main culprit.

There are “two reasons” for the high prices, the 79-year-old now explained. He said:

“The first was COVID. Because of the pandemic, supplies of essential materials were disrupted, causing prices to rise.”

Following this, Biden attempted to explain the disruptions to supply chains in 2020 caused by the pandemic. He added:

“And the second key reason for inflation is Vladimir Putin, no kidding.”

Accordingly, “about 70 percent of the increase in inflation last month was the result of Putin’s price increase due to the impact of gas and energy prices”.

INFLATION: President Biden: “We made a lot of progress and we have an incredible opportunity ahead of us, but we know what families are still struggling with higher prices.” pic.twitter.com/XK43LDAMal

The White House has been using the “Putin price hike” argument since the March 8 ban on imports of Russian oil and gas into the US. However, the Russian President responded that Moscow had “absolutely nothing” to do with rising US gas prices, as Russian exports to the US had been “minor” from the start. “They are only hiding behind this decision to once again deceive their own people,” Putin said last month.

Recent polls suggest most Americans think so. According to figures from Quinnipiac, a polling firm traditionally friendly to the Democrats, located Biden’s approval rating is just 33 percent.

According to the US Bureau of Labor Statistics, March saw the highest rise in inflation since 1981. Gas prices rose 18 percent month-on-month and 48 percent year-on-year.

According to current estimates, since January 2020, when Biden took office, almost 80 percent of all US dollars currently in existence have been converted printed.