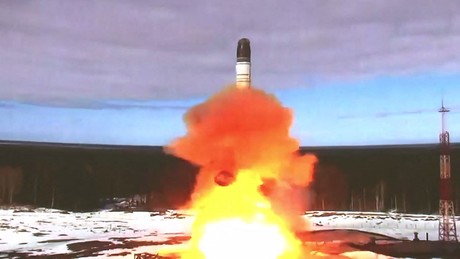 The Russian Defense Ministry announced on Wednesday that the Sarmat ICBM had been successfully launched. The launch is the first in a series of government acceptance tests. These types of tests are the stage at which the new development is ready for series production. There is a high probability that a pilot series that can be used immediately in an emergency has already been produced.

Russian President Vladimir Putin congratulated the military on the successful test of the missile:

“This truly unique weapon will strengthen the potential of our armed forces, reliably ensure Russia’s security from external threats and make those who, in the heat of aggressive rhetoric, try to threaten us, our country, think twice.”

The Sarmat missiles (type designation according to Russian classification PC-28according to the classification of the NATO SS-X-30 Satan2) was developed to use the Soviet-made launch vehicles for nuclear warheads of the type P-36M2 (according to NATO classification SS-18 “Satan”). Although the latter were modernized and improved in several steps in the post-Soviet period, Russian military strategists agreed that it was time for a new development, which will be implemented with the PC-28.

According to Russian information, the Sarmat missiles have a range of 18,000 kilometers. In this way they allow a nuclear strike on the USA on a suborbital trajectory over any point on the globe, probably even over the South Pole, for which the American missile defense concepts are not prepared according to the military strategists. At least the theoretical possibility of a nuclear strike that does not take the shortest route via the North Pole will significantly increase the cost of the American plan to effectively protect itself with a missile defense system.

The payload of the rocket has been significantly increased compared to the previous type: instead of 8.8 tons, up to 10 tons can be delivered to the target. In addition, the “Sarmat” allows the transport of several smaller warheads that can be used separately, making interception even more difficult for a missile defense system. There should be up to 10 warheads, but if maneuverable warheads are used, up to three according to the current state of development.

The achievable speed should be up to Mach 15, i.e. 15 times the speed of sound. When fully loaded, the average speed in the atmosphere should be between 5 and 7 kilometers per second. That is also around 18,000 to 25,000 kilometers per hour.

The ability of the “Sarmat” to reach orbit is also a breakthrough from an economic point of view: Shortly before the end of their useful life as a weapon carrier, the rockets are to be used in civil space travel in the future and thus partially compensate for their costs.

More on the subject – Putin on the modernization of the Russian nuclear triad: major conflicts almost impossible, blackmail pointless