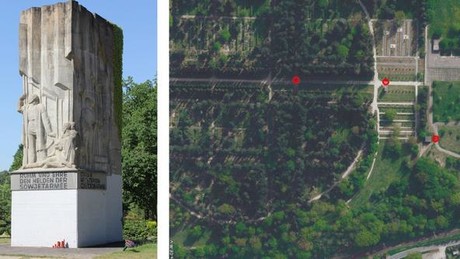 A Soviet memorial and a monument to Nazi concentration camp victims were desecrated again, this time in Neubrandenburg. Ukrainian nationalist slogans and Nazi graffiti in blue and yellow paint were discovered at a cemetery in the Mecklenburg-Western Pomeranian city. Police investigations are ongoing.

Like the Nordkurier from Neubrandenburg reported, Nazi graffiti and Ukrainian nationalist slogans were discovered in the city’s New Cemetery today. The Soviet memorial and a concentration camp memorial plaque were desecrated with blue and yellow paint.

The newspaper had become aware of the defacement through a reader’s notice. The Soviet memorial is dedicated to the memory of the soldiers of the Soviet Red Army who died during the liberation of Germany in World War II; the plaque commemorates 99 women who died in the Neubrandenburg branch of the Ravensbrück concentration camp. As the newspaper writes, during German fascism around 6,000 women had to do forced labor in the Neubrandenburg branch of the concentration camp, sometimes under unimaginably difficult conditions. Among them were also many Ukrainians.

“The lap…” The Soviet memorial and the women’s memorial for female concentration camp victims on the New Cemetery in Neubrandenburg were desecrated yesterday by unknown persons with swastikas and wolf rods in blue and yellow and slogans such as “Glory to Ukraine” (Слава Україні!). been. pic.twitter.com/EOyyO8WxyL

The fascist symbolism of the graffiti on the commemorative plaque is clearly recognizable: the Nazi swastika, a so-called “Wolfsangel” rune and a “Celtic cross” in blue and yellow.

The Soviet memorial was daubed with the Ukrainian nationalist slogan “Slava Ukrajini – Heroyam Slava!”, also in the national colors of Ukraine, but in somewhat awkward letters. As far as can be seen from the published pictures, the Cyrillic letter р, which corresponds to the Latin r, seems to be missing in the word “Ukrajini”.

The characters may have been written with a deliberately disguised script if the perpetrators were native speakers, or else by people unaccustomed to writing Cyrillic.

The aforementioned Ukrainian nationalist slogan became the official greeting in Ukraine after 2014 (“Glory to Ukraine! – Glory to the heroes!”). The reference to German fascism is obvious: the fascist symbols attached to the monuments were historically used by the German Nazis in occupied Ukraine and are used today by both neo-Nazi groups and nationalist or fascist paramilitary formations in Ukraine. As the Nordkurier rightly points out, the so-called “Azov” battalion, which is frequently mentioned these days and from which fighters are still holed up in the Mariupol steelworks, also has the “Wolfsangel” in its coat of arms.

As the newspaper reports, the police investigations have started and have been taken over by state security; there was a suspicion of political motivation, and a connection with the war in the Ukraine was not ruled out, as was a connection with Adolf Hitler’s date of birth. The city administration of Neubrandenburg wanted to have the graffiti removed as soon as possible after they had been documented for investigative purposes, it said.