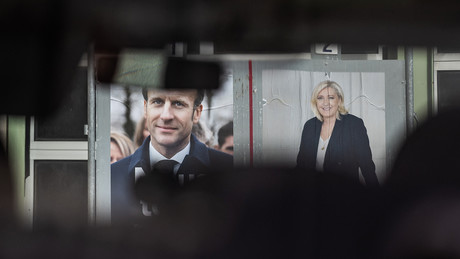 On Wednesday evening, France’s candidates for the presidency will face a joint television debate. Polls show that incumbent centrist Macron has a lead over his right-wing challenger Le Pen. Experts say Macron’s victory is still not certain.

Four days before the planned presidential elections in France, both candidates are to defend their programs in a televised debate. The Associated Press suspects that the result of Sunday’s runoff could decide the outcome of this.

The 44-year-old centrist Emmanuel Macron and the 53-year-old right-wing candidate Marine Le Pen will face each other for the second time in a television duel on the evening of April 20. In the run-up to the presidential election in 2017, the two had already met for a debate. At the time, Le Pen’s performance proved unconvincing. She mixed up company names, searched her records for answers, and at one point seemed to have lost her self-control. As a result, Macron secured 66 percent of the vote versus Le Pen’s 34 percent.

Now, according to media reports, Le Pen is said to have learned a lesson from her defeat at the time and prepared for the debate “at home” together with her closest advisors. She is expected to present her nationalist agenda as an alternative to Macron’s current policies.

Incumbent President Macron still retains the lead in recent polls. Nevertheless, his poll ratings of 53 to 56 percent are significantly lower than five years ago. Several of his political allies warn against negligence in the run-up to the runoff. French Prime Minister Jean Castex said in a radio interview on Tuesday:

“The game isn’t over yet and we certainly shouldn’t take the poll numbers to the conclusion that the election has been decided.”

An alliance of voters from the center left and center right, which has so far kept right-wing extremists out of power, can no longer be taken for granted, explained Castex’s predecessor and current mayor of Le Havre Édouard Philippe. A low turnout could be particularly problematic for Macron.

In fact, more than 40 percent of those under 35 did not vote in the first ballot, reports the Frankfurter Allgemeine Zeitung. The left-wing candidate Jean-Luc Mélenchon, who is critical of NATO, did not make it into the runoff with 22 percent of the votes, and numerous young people are now protesting that the election was limited to Macron and Le Pen. For example, around 400 students occupied the historic building of the Sorbonne University for three days to protest against a choice between “plague and cholera”. There were also demonstrations at other universities. The participants shouted: “Neither Macron nor Le Pen!”

More on the subject – Macron or Le Pen? Presidential election in France setting the course for Europe