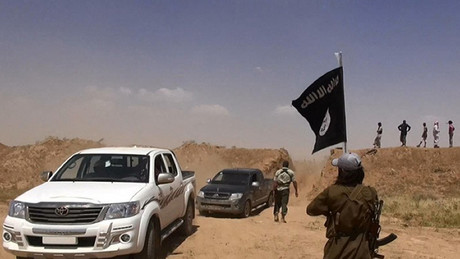 In a message, a spokesman for the IS terrorist militia called on members and supporters to carry out attacks against Europe and Israel. The distraction of the target countries, in particular by the Ukraine crisis, should be exploited.

The terrorist organization Islamic State (IS, formerly ISIS/ISIL) has called on its members and supporters for jihad against Europe and Israel while the West is reportedly distracted by the conflict in Ukraine. This emerges from an online message quoted by the Times on Monday.

The message was released on the occasion of the Muslim holy month of Ramadan. In it, the new IS spokesman Abu Omar al-Muhajir calls on his supporters to carry out terrorist attacks against Europe and Israel as part of a “global offensive” while “the crusaders” are said to be fighting each other over the Ukraine crisis.

At the same time, the attacks are intended to serve as revenge for the fallen IS leader Abu Ibrahim al-Hashimi al-Kurashi. Admittedly, he was killed neither by Europe nor by Israel, but by the USA in an air strike. Abu Hassan al-Hashimi al-Kurashi (sometimes also called al-Qurayshi after Quraysh) appointed.

While the Ukraine crisis is causing concern in European Union (EU) countries, along with general outrage over essential energy supplies from Russia, Israel has largely stayed out of the conflict so far. However, Israel has already stepped up its own attacks on Palestinians in the West Bank in an alleged response to two terrorist attacks by IS sympathizers. More than 150 Palestinians were also injured in violent clashes with Israeli police at Jerusalem’s al-Aqsa Mosque.

Although the IS spokesman spoke in the usual manner of a “liberation” of Jerusalem through the establishment of a caliphate, the experts quoted by the Times said that IS was no longer capable of major operations abroad. After years of fighting by Syria, Russia, Iran and the US, this group now controls only a small area of ​​Syria. In 2019, then-US President Donald Trump officially declared IS defeated.

However, an offshoot of the organization known as ISIS-K carried out a suicide attack at Kabul Airport during the evacuation of US forces. Some attacks in Europe, including the murder of British MP David Amess on October 15, 2021, are also attributed to IS sympathizers.

More on the subject – IS terrorist militia appoints new leader