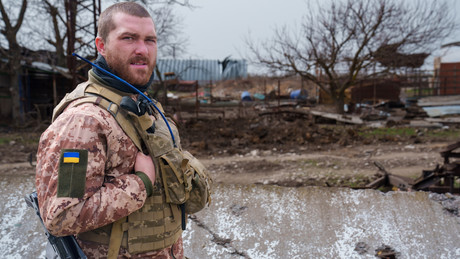 According to the Donetsk People’s Republic, the Ukrainian military has shown a predatory behavior towards civilians in the areas close to the front. Accordingly, it hinders the escape of civilians from the embattled cities and kills car occupants.

In the embattled towns in the Donbass region, civilians are being threatened not only by artillery fire, but also by Ukrainian army fighters. The survivors unanimously tell how the fighters chased people through the streets with sniper fire and deliberately shelled residential buildings with tanks and artillery. It is particularly dangerous for car occupants.

On Tuesday, the Donetsk People’s Republic reported the killing of at least 23 residents of the city of Kramatorsk in the north of the Donetsk People’s Republic, citing eyewitness reports. The city was recaptured by the Ukrainian army in the summer of 2014 and has since turned into a solid military stronghold. At the beginning of the great Donbass offensive, it remains under Ukraine’s control.

The militants stopped and seized vehicles at the exit from the city on the N-20 road towards Slavyansk, authorities said. If the car owners resisted, they and the occupants were shot on the side of the road.

“We certainly assume a total of 23 civilians killed by Ukrainian nationalists. The actual number of victims could be much higher.”

Apparently, these are escape strategies when the fighters change their clothes and then pretend to be refugees using civilian vehicles. The head of the Donetsk People’s Republic Denis Pushilin told a TV interview on Tuesday about a story from the city of Mariupol, when a militant posed as the father of three small children whose parents he killed. “The hair stands on end in the face of such stories.”

“The work on investigating such crimes has intensified. Our investigative authorities and prosecutors document every such case, then the tribunal must follow,” said he.

The Donetsk authorities are receiving support from their Russian colleagues. Shortly after reports of 23 civilian deaths in Kramatorsk were announced, the Russian Investigative Committee said it would now investigate the incidents and find the perpetrators. “The head of the Russian Investigative Committee, Alexander Bastrykin, has ordered an investigation into the murders committed by Ukrainian militants in Kramatorsk to rob civilians,” the agency said on its Telegram channel famous.

There are many indications that the fighting around Kramatorsk will be just as fierce and costly to civilians as in Mariupol. On April 8, Kramatorsk Central Station was fired upon by a suspected Ukrainian Tochka-U missile during the evacuation of residents. 52 people died and more than a hundred were injured. Ukraine and the West immediately blamed Russia for the shelling. However, the evidence, which has not yet been refuted by Ukraine, suggests that it is a Ukraine false flag attack acted.

The storming of the last place of refuge of the Ukrainian Azov units on the “Azovsteel” site in the Mariupol industrial zone is taking place. The new city administration of Mariupol appreciates the number of civilian casualties to more than 5,000. This is essentially at the expense of the Ukrainian army, because the evacuation of civilians was systematically prevented by the orders of the Ukrainian army. In turn, the rescued residents describe this to the media and investigative authorities.