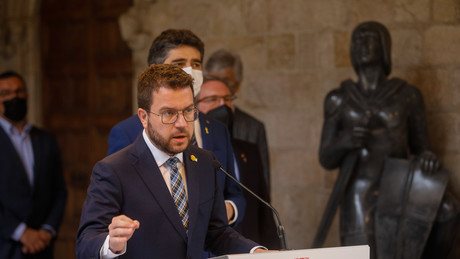 An affair involving the spying on Catalan politicians is causing difficulties for Spain’s central government: Spanish authorities are said to have investigated well-known politicians from the Catalan independence movement using the Pegasus spy software, which has become well-known. According to studies by the Canadian research group Citizen Lab, which was reported by the US magazine The New Yorker, more than 60 Catalan politicians and their employees and families were systematically monitored. Between 2017 and 2019, the cellphones of politicians and activists were hacked and bugged using Israeli “spyware” called Pegasus by Israel’s NSO Group Technologies. So far, the president of the regional government of Catalonia Pere Aragonès and his predecessor Quim Torra and Carles Puigdemont, who has been in exile in Belgium since 2017, and Artur Mas are also on the list of those spied on.

Almost all of the incidents occurred between 2017 – the year of Catalonia’s ultimately failed bid for regional independence – and 2020. Although NSO Group Technologies claims that Pegasus is only being sold to governments to track down criminals and terrorists, a joint investigation by the Guardian and El País revealed two years ago that the speaker of the Catalan regional parliament and at least two other pro-independence supporters were warned that the spy software was being used to target them.

Puigdemont announced legal action against all those responsible on Tuesday and wanted to take appropriate steps in Spain, Germany, France, Luxembourg and Switzerland. He also called on the President of the European Commission, Ursula von der Leyen, to also act and “hold Spain accountable” for using the spy software against political rivals. It is a “massive violation of fundamental rights”. The party Unidas Podemos (UP), junior partner in the governing coalition of Spain’s central government under Prime Minister Pedro Sánchez, also called for an in-depth investigation. If necessary, “heads would have to roll,” said UP spokesman Pablo Echenique.

The Catalan regional president Pere Aragonès also called on the Spanish government to launch an “official and independent investigation”. Aragonès told the Guardian that the alleged surveillance uncovered by Citizen Lab’s cybersecurity experts on Monday constitutes a violation of individuals’ rights, an attack on democracy and a threat to political dissidents.

“My phone was targeted because of my political duties — first as vice president of the region and then as regional president,” he said. “This goes beyond what was done to me as an individual and as a citizen. They also attacked the democratically elected body of the Catalan government, which is an attack on all Catalan citizens and institutions and therefore an attack on democracy.”

Aragonès said the apparent espionage was of such magnitude that it could not have escaped the attention of the Spanish authorities. It is also unlikely that it is the work of a single agent of the Spanish secret service (CRF) acted.

“There are also approval procedures that intelligence agencies have to go through, and of course that means it can’t have gone unnoticed.”

Of particular concern is that the Pegasus software has been used against politicians, lawyers and civil society groups.

Citizen Lab and Amnesty International have also called for an official investigation into the matter. The Spanish government, meanwhile, has denied any wrongdoing, while the Policía Nacional and the Guardia Civil have said they have no connection with NSO Group Technologies and have never used its services. On Tuesday afternoon, government spokeswoman Isabel Rodríguez said the espionage allegations were not new and had already been dealt with by the government.

“But I want to reiterate our position that the government has nothing to hide – absolutely nothing,” she said.

In addition, one wants to cooperate fully with the judiciary in this matter. However, she could not comment on whether the CNI had access to the Pegasus software or whether it had ever used the program, as these matters relate to national security and have therefore been classified. The CNI had previously told the Guardian and El País that its work is supervised by the Supreme Court and that it acts “in full compliance with the legal system and with absolute respect for the laws in force”.

More on the subject – Historian on wiretapping scandal involving Catalan politicians: “Spain is not fully democratic”