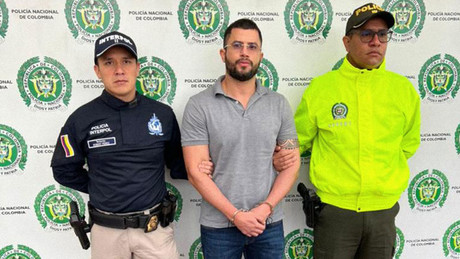 Colombia reports the biggest hit against the international drug trade since the arrest of the drug lord Otoniel: One of the largest drug dealers in the world, Eduardo “Boliqueso” Giraldo, has been arrested in Mexico as part of an international operation.

On April 20, the Colombian police announced the arrest of one of the country’s most wanted drug lords. He is Eduardo Fernando Giraldo, nicknamed “Boliqueso”. He is accused of smuggling cocaine into Central America, Europe, the United States and the United Arab Emirates.

According to police, the arrest took place in the Coyoacán district of Mexico City after a special squad of Colombian police and their Mexican colleagues located Boliqueso in the holiday resort of Acapulco on the Pacific coast and tracked him to Mexico City. As part of the operation, in which British and US authorities also took part, several luxury bodies and apartments were found.

Police director Jorge Luis Vargas Valencia said in a video message on Twitter on Wednesday evening (local time) that Boliqueso had been a member of several Colombian drug cartels during his criminal career and was behind the shipment of several tons of cocaine to the United States. This is the biggest blow against international drug trafficking since the arrest of Dairo Antonio Úsuga, nicknamed “Otoniel”.

“This is the most important arrest for the US Drug Enforcement Agency, the UK authorities and the Colombian police. It is about one of the drug traffickers who have smuggled the most cocaine out of Colombia in recent years.”

Accordingly, Boliqueso was immediately taken to Colombia and informed of the extradition request to the United States. Boliqueso was arrested in Brazil in 2016. However, a court in São Paulo released him in November 2018 after two years without restrictions.