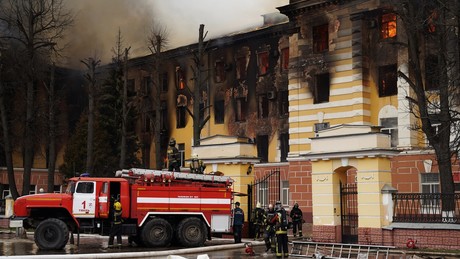 A fire has broken out at a defense research institute near Moscow, in the city of Tver. For the time being, the fire is said to have claimed at least five lives. A fire brigade helicopter is also on site. The causes of the tragedy are not yet known.

A fire broke out on Thursday afternoon in the building of the Central Research Institute for Aerospace Defense Forces in the city of Tver, some 174 km from Moscow. This was announced by the local department of the Ministry of Emergency Situations.

The fire in the building was reported at 11:08 a.m. local time. According to a representative of the city’s emergency services, five people were killed and at least 20 others were injured.

According to an unnamed source from the TASS news agency must about 30 people sought medical help. Some of those affected suffered smoke inhalation, while others sustained injuries when they jumped out of windows to escape the fire.

Meanwhile, the rescue workers have been trying to put out the major fire for several hours. A fire engine is also on duty. The rescuers’ work is made more difficult by strong winds of up to 12 meters per second. Black smoke spreads over the Volga River and is clearly visible from the city center. It smells noticeably of fire. A representative of the emergency services said:

“The total area is 1,000 square meters and has been rated the third level of difficulty.”

Heavy smoke can be seen in the center of Tver. An operations center was set up at the scene of the fire to coordinate the extinguishing work. The press service of the Tver regional government reported:

“Currently, fire and rescue services are on scene and 14 ambulances have arrived. The injured are being treated medically.”

The employees of the research facility of the Russian Ministry of Defense in Tver must according to the local newspaper Moskovsky Komsomolets Tver. The cause of the fire is currently being determined, according to the garrison command. Some media point out that the fire could have been caused by a fault in the power grid:

“According to preliminary information, the cause of the fire was an emergency operation of the electricity network, since the building and the wiring are old.”

The Tver Research Institute studies issues of air and space defense and military space-related activities of the Russian Federation, the joint air defense system of the CIS member states, and the development of systems and facilities of the air and space forces.