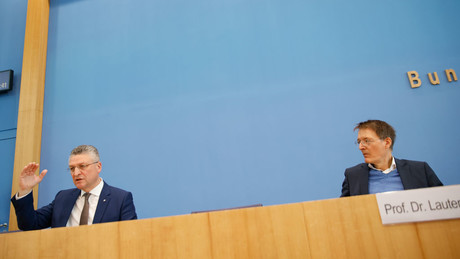 It can be assumed that both the RKI and Minister of Health Lauterbach were aware of the most recent RKI publication of April 14 on current vaccination rates in Germany before the vaccination debate on April 7. Was there a deliberate delay in presenting the facts?

The 10th report of the COVID-19 vaccination rate monitoring in Germany (COVIMO) was published on April 14th on the website of the Robert Koch Institute released. The nine pages found there document the recorded data of the RKI report, based on the data collection from January 10th to 27th, 2022. This documents a period of no less than 77 days between the final result and the resulting publication for the interested public .

Due to the close cooperation between the Robert Koch Institute (RKI) and the Federal Ministry of Health (BMG) since the beginning of the corona crisis, it should be assumed that the head of the RKI, Lothar Wieler, will forward this important data to Minister Lauterbach immediately after he has become aware of it sent.

If only because of the fact that in the period from January to April there was a dynamic discussion on the part of politics and society as to whether there would be a decision on compulsory vaccination in Germany at the final session of the Bundestag on April 7th in Berlin.

The results of the 10th report contain explosive material, as they show on page 3 that at the end of January 2022, an impressive 95.8 percent of the so-called “vulnerable group” of over-sixties in Germany were vaccinated according to the results of the RKI. This fact could have given the debates in the German Bundestag a completely new context:

The period of time between the collection and publication of the nine previously published by the RKI COVIMO reportsaveraged only around 28 days, i.e. less than half of the current report, according to the research by TichysEinblick (TE). In addition, “only a good 1,005 people were surveyed for the most recent publication, while the previous ones were sometimes over 3,000.” So why was the delay in publication? The RKI’s answer to the corresponding TE request was:

“Depending on the scope of the survey and the interpretation of the data, the evaluation of the data collection takes several weeks to process. There are also other projects and absences, for example due to vacation or illness.”

According to the article, the answer to the same TE inquiry at the BMG was “identical”. The second revealing question from TE to the RKI and BMG was: “Who knew everything about the publication before the vote in the Bundestag? The corresponding article on TE says:

“The RKI responds to a TE request after a long back and forth and internal coordination processes: “We do not comment on such internal agency matters.” Finally, the Federal Ministry of Health concedes to TE that at least the ministry itself was informed “in advance” about the data . On April 11, a briefing at the technical level took place.”

So a “briefing of the specialist level” four days after the all-important Bundestag session in Berlin? In relation to the vehemence of the vaccination discussion in Germany, it is hard to imagine. TE comments:

“It is remarkable that the RKI and BMG refuse all other, even very simple, information and block inquiries. The impression remains that the Robert Koch Institute, which is bound by instructions, set an appointment that was extremely favorable for the Minister of Health and his political goals.”