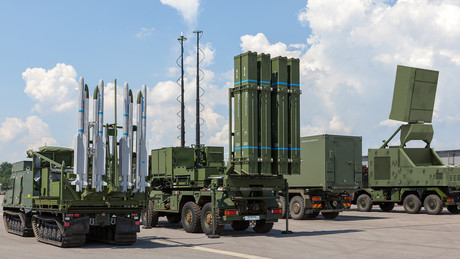 In view of the “changed threat situation” for Germany, the armaments companies Hensoldt and Diehl Defense want to intensify their cooperation. Their air defense system, which was developed in cooperation, is to be integrated into the existing systems of the Bundeswehr.

The German companies Diehl Defense and Hensoldt have agreed to increase their cooperation in the field of ground-based air defense. This is from a report published by Diehl Defense at the beginning of April press release out. The aim of the extended partnership is therefore to improve existing offers to combat new and emerging threats. With their cooperation, the two armaments companies want to “make a contribution to dealing with the changed threat situation for Germany and in Europe,” says the statement.

“I am pleased that we can further optimize our existing air defense systems through the more intensive cooperation with Hensoldt in order to offer solutions for new threat situations,” commented Helmut Rauch, CEO of Diehl Defence, on the new joint project. However, the two companies have been collaborating on the development of ground-based anti-aircraft systems for some time. With the agreed partnership, according to Diehl Defence, this cooperation should only be intensified:

“Diehl Defense has integrated the combat standard software IBMS-FC from Airbus and active and passive radars from HENSOLDT in its system for medium ranges (IRIS-T SLM), transferred it to series production and has already delivered it to an export customer. The guided missiles from IRIS-T SLM are part of Diehl Defence’s IRIS-T product family.”

As announced earlier this year, towards the end of 2021 the company had a first successful test with its new ground-based Air defense system IRIS-T SLM can prove. In the test, which took place under “realistic conditions” at an unknown location, Declarations several test shots of the guided missiles integrated into the IRIS-T-SLM system have been carried out. The shots served to prove the technical and operational performance of the entire system. The ones needed for this guided missile are produced in Diehl-Werke, which is located on the site of a disused quarry near the Saarland town Nonnweiler condition. There the rockets are also equipped with their respective propulsion and warhead and finished.

The IRIS-T SLM can be enhanced with certain elements of the short range version of the IRIS-T SLS. Diehl Defense presented a further developed variant. According to the two companies, their product portfolio is able to meet the requirements of German air defense. The IRIS-T SLM offers protection against potential threats from the air, as it was specially developed to shoot down enemy aircraft, helicopters, missiles and drones, according to Diehl Defence. This makes it easy to integrate the system into those operated by the Bundeswehr and NATO Devices for electronic warfare possible:

“At the same time, there is full interoperability in the NATO-integrated air defense architecture.”

The cooperation between Diehl Defense and Hensoldt came about in view of the current threat situation in Germany, the armaments company explained in its press release, without going into detail about the alleged dangerous situation: “In view of the threats from missiles and rockets, new air defense systems will be required in the future that Protect the territory of the Federal Republic of Germany within the framework of NATO’s integrated air defense.”

According to Diehl Defence, Germany “needs to be equipped with ground-based air defense systems whose interceptor missiles have a range of 40 km and can engage targets up to a height of 20 km”. If things go according to the plans of the two armaments giants, a “360° all-round protection” should also be implemented in Germany, which would also withstand attacks with cruise missiles if necessary.

According to their own statements, the two armaments groups will be able to provide corresponding solutions for German customers as early as the third quarter of this year:

“In the event of an imminent procurement decision, the joint solutions from Diehl Defense and HENSOLDT can be delivered to German customers from the third quarter of 2022. These are products which, as purely German systems, are not dependent on foreign technology and therefore have the highest level of approval and certifiability for operation in Germany and beyond offer the highest possible security of supply.”