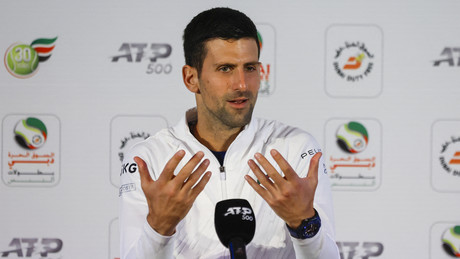 One of the most famous tennis players Novak Djokovic has declared that the Wimbledon organizers’ decision to suspend athletes from Russia and Belarus from the tournament was insane. The organizers justified their decision with the war in Ukraine.

Prominent tennis player Novak Djokovic has expressed his opinion regarding the banning of Russian and Belarusian athletes from the 2022 Wimbledon Championships. At a press conference on Wednesday, he described the Wimbledon organizers’ decision as crazy. Djokovic verbatim:

“As a child of war, I will always condemn war. We all know what happened in Serbia in 1999 and I know the emotional trauma it can leave behind. However, I cannot support the decision of the organizers of the Wimbledon tournament. I think that’s crazy.”

Djokovic also pointed out that tennis players have nothing to do with military actions. If politics interferes in sport, it doesn’t lead to good results. Djokovic was part of a broad protest among tennis players against the Wimbledon organizers’ move.

The Association of Tennis Professionals (ATP) and the Women’s Tennis Association (WTA) criticized the ban. The WTA “strongly condemns the measures taken by Russia and its unprovoked invasion of Ukraine”, but is disappointed with the announcement by the English tennis umbrella organizations AELTC and LTA.

The institution also recalled that it is a fundamental principle of the WTA that individual athletes can compete in professional tennis events on the basis of their merits and without any form of discrimination. It was further said:

“The WTA will continue to apply its rules to deter discrimination and ensure that all athletes can compete in our Tour events should they qualify, a position shared across professional tennis up to today’s announcement. The WTA will evaluate their next steps and what actions can be taken in relation to those decisions.”

ATP stated that the decision was unfair and had the potential to set a damaging precedent. Meanwhile, Wimbledon organizers have signaled their willingness to review the decision if circumstances change by June.