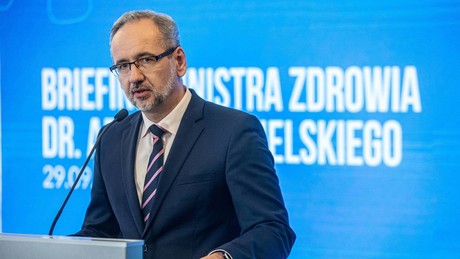 The Polish Minister of Health Niedzielski announced that Poland currently no longer needs any corona vaccines and is therefore refusing to accept and pay for deliveries with immediate effect. Niedzielski accuses Pfizer of a “complete lack of flexibility”.

On April 19, Polish Minister of Health Adam Niedzielski posted the following decision by his ministry on his official Twitter account:

“We have informed the European Commission and Pfizer that we refuse to accept and will not make any payments for any further COVID-19 vaccines.”

more accurate Explanations and details were announced by the Polish Minister of Health as part of the Rozmowa Piaseckiego program on TVN24. The situation with the wave of refugees from Ukraine and in particular the associated financial burdens are decisive for the decision of the Polish government. Niedzielski pointed out in the program that – in view of Poland’s current confrontation with a wave of refugees – “we have the right to expect the European Commission to create special instruments for this case”. The minister explained it to TVN24 as follows:

“We wanted to spread the contracts for the supply of COVID-19 vaccines over a longer period of time, but manufacturers are not flexible. That is why we exercised the force majeure clause last week and are refusing to accept vaccines and make payments .”

According to the Civil Code, “force majeure” means an external event that “is not foreseeable and cannot be prevented.”

The spokesman for the EU Commission Stefan De Keersmaecker reacted to these allegations in an initial statement in Brussels with the explanation:

“The EU states are bound by their obligations under the vaccine treaty, but the European Commission naturally understands the difficult situation in which Poland finds itself.”

Furthermore, the EU Commission would try to “facilitate the necessary talks between the Polish side and the company Pfizer in order to find a pragmatic solution to this special situation that the country is facing”, according to information from TVN24.

Irrespective of the special refugee situation, Poland’s most recent decision also has health policy aspects. Poland currently has one vaccination rate of 59.3 percent. To Declarations According to the Polish Ministry of Health, 51 percent of the 38 million Poles are fully vaccinated, but 59 percent have only received a first dose so far. Niedzielski also said in the interview that Poland had therefore already started “donating or reselling vaccines to countries” in stock. The country has managed to “donate or sell almost 30 million of these preparations,” the minister told TVN24. So sold Poland already in August 2021 one million doses of BioNTech vaccine to Australia. Three million BioNTech doses found in December 2021 even made their way from Poland back to Germany.

Niedzielski supplemented his explanations by stating that the global pandemic COVID-19 situation has changed significantly. As a result, there is currently “no greater need for corona vaccines”. According to TVP.info informed the minister said that Poland “is still sitting on 25 million unused vaccine doses, while 67 to 70 million more doses” have already been ordered. TVN24 quotes Niedzielski with his explanation of the fundamental contractual defects:

“We have approached both the European Commission and the main (…) vaccine manufacturers to more easily spread these deliveries, which were planned in such large numbers over the next few quarters, in order to give us greater flexibility, a to give greater freedom in these contracts that we have entered into.

Unfortunately, we encountered a complete lack of flexibility on the part of the producers here. There was no situation where we could seriously change the terms of this contract and this contract was signed in a crisis situation. You could say we don’t have that much freedom of choice in this contract.”

He pointed to the fact that the current EU contract with the vaccine manufacturers “has largely tied our hands”, adding that this now represents “serious financial burdens” for the Polish government in view of the current events. To Declarations According to the Minister of Health, the volume of current contracts for vaccines amounts to several billion zlotys: “Our contract with just one company amounts to six billion zlotys until the end of 2023, and this year it will be more than two billion zlotys.” When asked whether Poland’s decision, which has now been announced, “means the termination of the contract,” the head of the Ministry of Health replied to TVN24:

“This contract has a special construction, because I would like to remind you that it is a contract between the EU Commission and the manufacturers, that in reality there is no possibility of direct cancellation because we are not a direct party. This is a statement that provides information about our further course of action.”

The decision of the Polish Ministry of Health, in consultation with the Polish government, is sometimes met with criticism in Poland. According to TVP.info, Dr. Paweł Grzesiowski as official expert the Polish Supreme Medical Chamber:

“I am afraid that Poland’s unilateral decision to withdraw from an agreement that was in a sense an agreement agreed upon within the European Union could be very detrimental to us. Because it shows that Poland is not a responsible partner and such decisions alone meets instead of coordinating with the other countries that were involved in this joint purchase.

We should keep in mind that the lawyers of the pharmaceutical companies will certainly scrutinize the agreements very carefully. If there are clauses that are unfavorable to us, that means, for example, that Poland will have to pay some penalties if it unilaterally withdraws from the agreement.”

According to the Polish legal website Prawo.pl, Niedzielski already has that implied: “The consequence of this will be a legal battle that is already underway.” For his part, Michał Dworczyk, head of the Office of the Polish Prime Minister, pointed out, according to Prawo.pl, that “manufacturers were and are probably geared towards maximizing profits and that’s why we have a dispute, which hopefully will lead to a – from the Polish point of view – positive solution will.”

The Pfizer company explained in a first reaction, according to Reuters.com, that “the agreement on the delivery of the COVID-19 vaccine to the member states of the European Union was reached with the EU Commission” and added with regard to the explosive nature of the Polish initiative:

“Our discussions with governments and the details of vaccine deliveries are confidential.”

According to Reuters, Pfizer’s German partner BioNTech only reacted by pointing out that “Pfizer is responsible for trade relations with Poland”.

More on the subject – BioNTech report: To date, the company has not been able to prove the effectiveness and safety of its mRNA vaccine